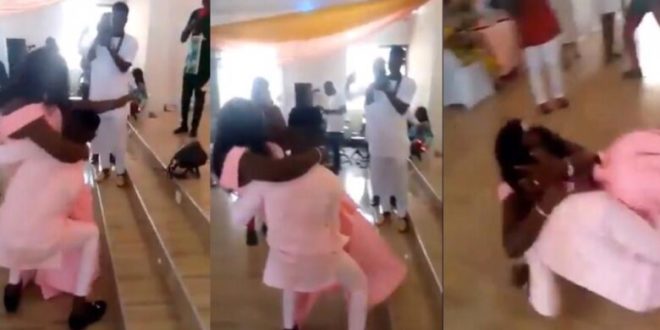 A groom who was trying to make his wedding ceremony a memorable one by carrying his bride to the altar fell to the floor after he wasn’t able to bear the load.

Per the video seen online, the groom who appears to be slim was seen dancing with his bride. Apparently, his bride is the plus-sized type which meant that he has to be strong enough to carry her.

Well, the groom bit more than he can chew when his attempt to carry his bride to the cheers of the crowd gathered did not go as planned when they came falling to the floor.

Interestingly, the bride and groom did not regret the accident as they can be seen laughing heartily at themselves as they prepare to give it another try.

it wasn’t a wedding gone wrong; it was a ‘carrying’ gone wrong.