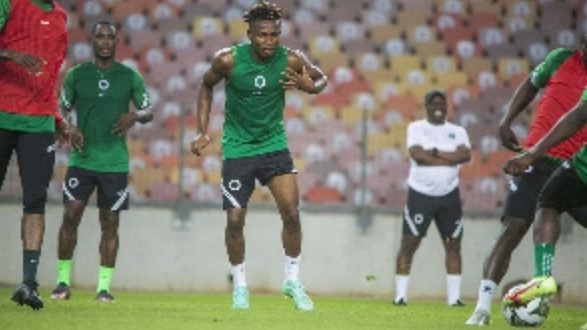 Watch how Super Eagles players are training for Ghana game

The Super Eagles of Nigeria have switched up preparations for their game against the Black Stars of Ghana at the Baba Yara Stadium on March 25, 2022.

Nigeria began training on Monday, March 21, 2022 and stepped up their preparations following the arrival of 22 of the invited players.

The players, led by skipper Ahmed Musa were put through their paces by coach Augustine Eguavoen and his technical team. They also underwent some drills before a kickabout in their camp in Abuja.

Nigeria have been dealt multiple blows following the withdrawal of Wilfried Ndidi and Maduka Okoye due to injuries.

They have however been boosted with the arrival of Leicester winger Ademola Lookman who recently switched allegiance from England to Nigeria.

There is high confidence within the camp of Nigeria that the Black Stars are not good enough and are there for the taken.

Skipper Ahmed Musa in a video released by the media team of the Super Eagles sounded upbeat about the chances of his countries.

“Nigeria and Ghana is about politics, Jollof, about music, acting, fashion everything, and thank God football has brought us together to show who is the King,” Musa said.

Previous Russia war to hit construction sector as Ghana imports 60% of steel, iron ore from Ukraine – BoG
Next Tell us the meaning of ‘review’ from the ‘Black dictionary’ – Prof Naana Opoku-Agyemang mocks