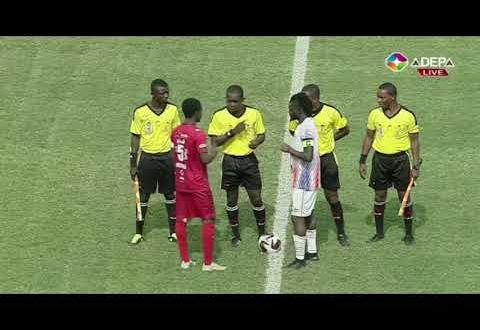 Asante Kotoko defeated Hearts of Oak 1-0 at the Baba Yara Sports Stadium in their matchday 24 encounter in the Ghana Premier League.

Kotoko had the first chance in the game through Moro Ibrahim when he sent a low drive across the face of goal but there was no one to connect.

The Porcupines kept probing for a goal and were awarded a penalty after Brazilain player Fabio Gama was brought down in Hearts of Oak’s box.

Cameroonian striker, Franck Mbella Etougah stepped up and dispatched the ball into the net as he sent goalkeeper Richard Ayi to the opposite direction.

Straight from their pass after conceding, Hearts of Oak zoomed into attack but were denied by Danlad Ibrahim who read the situation well.

The Phobians looked shaky in defence as Kotoko made another incursion but this time Richard Ayi dealt with it.

Samuel Inkoom made his debut in the game and also created a few chances at goal but Hearts of Oak could not score.

Moro Ibrahim came close to scoring when he sent in a powerful shot only to miss by inches.

In the last few minutes of the game, the Phobians went in search of a goal but Danlad remained resolute in defence for the Porcupines.

The win takes Kotoko 16 points adrift of their rivals Hearts of Oak.