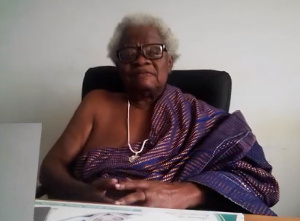 Charles Kormi Kudzodzi, popularly known as Papavi, the 85-year-old leader of the Homeland Study Group Foundation has questioned the rationale behind the government’s decision to send over 1000 armed men to look for him.

He explained he had made himself available to the police and other state security agencies on several occasions anytime they needed him.

In a viral video available to GhanaWeb, Papavi stated: “I remember we once went for a meeting, we closed, and I went into another meeting. I was attending meetings here and there, peaceful meetings. Meetings here and there. At the end of one, I was informed that several soldiers, heavily armed, were chasing after my name. Rumours even had it that I should be brought either alive or dead.”

Explaining his decision to go into hiding, Papavi stated: “I have made myself available to the police, security agencies on several occasions. Anytime they wanted me, I went, and we had discussions, and I came home. But this time, I don’t know why over one thousand young men were holding guns looking for an 85-year-old man. I don’t know what they have in mind about me, so I had to hide my face a little.”

Papavi then charged the Government of Ghana: “It had come to my attention that about a week or two ago, there was the blocking of roads, a sort of a demonstration, mayhem in the land [parts of Volta Region]. The Homeland Study Group is a peaceful group. A peace-loving group. A peace generating group which started [in] 1994. I am advising strongly that our people, the Government of Ghana, should take that letter published online seriously and go by it. I have on two occasions written to the President of Ghana for us to sit down and talk at a round table but no attention has been given to the letter.

He added: “Nobody should label the Homeland Study Group Foundation with this kind of thing. We are not like that. Ghana should intensify its level of investigation and not just suspect and arrest people, firing people and locking people up.”

Homeland Study Group Foundation, a group demanding to secede from Ghana for an independent Western Togoland state, blocked roads, leading to the Volta and Oti regions, including the roads leading from Kpong to Akosombo, Juapong to Ho, Ho to Mepe, and Sogakope to Accra.

The secessionists attacked two police stations at Aveyime and Mepe and seized ten AK-47 assault rifles after breaking into the police armoury.

The group then turned their focus on the InterCity STC yard in Ho, the Volta Regional capital.

The police stated later that four armed men stormed the transport terminal of Ho InterCity STC yard demanding the keys to all the vehicles parked.

The armed men set two minibuses ablaze when the drivers failed to hand over the keys to the eleven buses which were parked there.

The hoodlums also beat up the drivers.