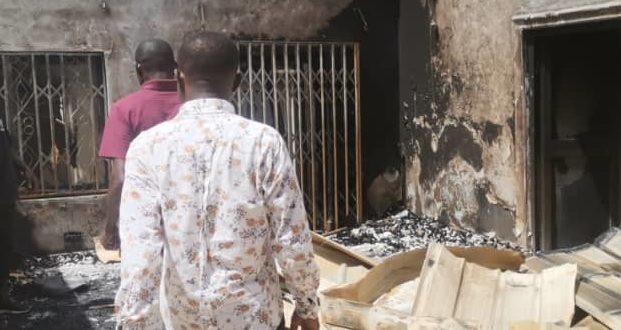 Ghana National Fire Service (GNFS) has begun investigations into the fire outbreak that claimed three lives at Asuyeboah North near Kwadaso in the Ashanti Region.

Although the immediate cause of the fire is yet to be established, preliminary probe by the GNFS, has revealed that the fire might have started from a pile of mattresses parked at the living room of the deceased.

The Public Public Relations Officer for GNFS in the Ashanti Region DOII Peter Addai in an interview with OTEC News Kwame Agyenim Boateng said  they are yet to conclude the investigations and will soon come out with thier findings.

“At the moment, I can tell you that officers are on the ground doing their investigations. We were called early Monday morning  to quench the fire   and we did our best to douse off the inferno.

Investigators are back to investigate what exactly caused the fire,” He told OTEC news.

A mother and her two children died in their home in Asuoyeboah, Ashanti region, on Monday , September 19, 2022, as a result of a domestic fire.

Felicia, 48, and her two children, Obed Owusu, 11, and Chritable Owusu, 9, did not survive the wrath of the fire despite residents’ best efforts to save them.

Their bodies have since been deposited at the Okomfo Anokye Teaching Hospital pending investigation by Security officials.