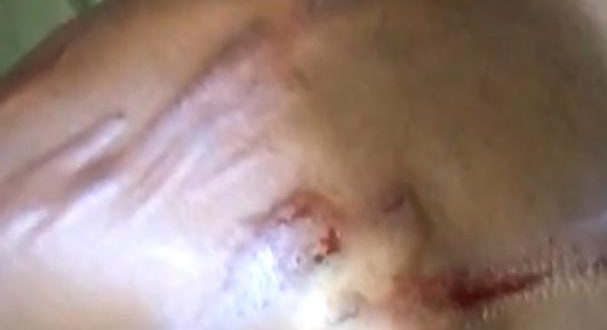 Video: Teacher inflicts cane wounds on students for laughing at him

There is tension at W.B.M Zion Senior High School (AMEZSS) at Akyem Old Tafo in the Eastern region after a teacher flogged two students mercilessly for laughing at him.

The two students were lashed by a senior housemaster identified as Mr. Dagar resulting in severe injuries of one of them, a form two General Arts student named Patrick Frimpong.

It is not clear why the male boarding students were callously whipped by the teacher but according to one of the victims, the housemaster accused them of making a mockery of him.

“We were laughing over some fond memories as boys boys but all of a sudden the house master who was passing by said we were laughing at him. Then he called us and started lashing the two of us by heart all over our bodies,” the victims narrated.

After the act, the housemaster reportedly sacked the two students from the boarding house on the fateful night.

Relatives of the students on Monday stormed the school to demand answers from the school authorities. They are threatening to report the incident to the Police for the arrest of the teacher.

The incident has sparked anger among the student body some of whom are threatening to cause commotion in the school to express their discontent. According to them, they are fed up with the maltreatment of male students in the boarding house by the housemaster.

Meanwhile, Assembly Member for Old Tafo Akyem-Ahenebronum electoral area Abdul Sarpong said the Unit committee in the area will send a petition to the school and Ghana Education Service to demand an investigation. He said the teacher has been accused by many students of inhumane treatment on campus.

Some old students are incensed over the incident therefore calling for a full investigation.

“WBM Zion Sec. School (AMEZSS) Snr. Housemaster, why must you do this to your student. No Money No Love, please take this matter up. This is the second time in the same year a teacher from my school is doing this,” an old student posted on his Facebook timeline.

Also, the Management of the School says a committee has been set up to investigate the incident.

The Headmaster of the school was in a crunch meeting with the Abuakwa North Municipal Education Director Grace Owusua on the incident as at 2:40 pm Monday.

Previous Databank was smuggled into the Agyapa deal by Imara as a ‘decoy’ – Amidu
Next Bees kill two children, others in critical condition