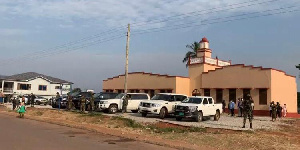 Some prominent individuals in the New Patriotic Party (NPP) have arrived in Wenchi in the Bono Region ahead of the High Court ruling on the Sene West constituency election petition.

The petitioners are seeking that the court grants them favour that the New Patriotic Party (NPP) candidate for Sene West, Joseph Markay Kumah be declared as Member of Parliament-elect in the just ended parliamentary election.

The petitioners withdrew their interlocutory injunction in the last sitting with the court slapping an amount of six thousand on them for damages.

Our reporter, Komla Klutse, reported Thursday morning from the court premises that he had seen some key NPP figures around. Among them were Minister for Regional Re-organization, Dan Botwe, Minister of State at the Ministry for the Interior, Bryan Acheampong, the NPP Nation Youth Organiser, Nana Boakye.

He, however, added that persons clad in party colours were not allowed in the court.