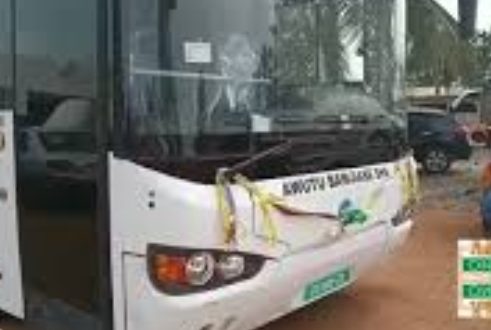 A GETFund bus donated to the Bawjiase Senior High School (SHS) has been seized by the District Police Command.

This comes after some supporters of the New Patriotic Party (NPP) and the National Democratic Congress (NDC) engaged in fisticuffs during a handing-over ceremony on Saturday.

Information gathered by Adom News‘ Kofi Adjei suggested the Awutu Senya West MP, Gizella Agbortui Tetteh, showed up at a ceremony organised by the District Chief Executive, Joseph Aidoo, to officially hand over the bus to the school though she had not been invited.

The MP ordered for a continuation of the programme just so she could hand over the vehicle, claiming that she was part of the lobbying process.

However, the pronouncement reportedly did not sit well with the NPP supporters present, resulting in a heated argument amid an exchange of blows between the factions.

The ceremony came to a halt as arguments over who takes credit for the provision of the bus continued at the ceremony grounds.

The development caused the police who were already present to move the vehicle to the police station.

The bus with registration number GV 681-21 is currently parked at the Bawjiase station though the police are yet to make any official statement on the incident.

Police sources say the action is to ensure the safekeeping of the bus amidst struggles and commotion between the two political divides.

It is currently not clear when the bus would officially be handed over to the school for use.