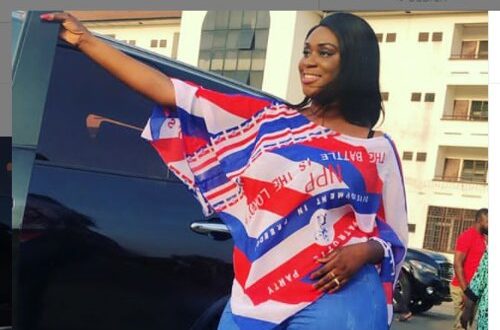 A Car of Ghanaian actress and sympathiser of the New Patriotic Party(NPP), Bibi Bright has been vandalised by some men wearing National Democratic Congress(NDC) T-shirts.

Bibi Bright took to her Instagram handle to narrate how the incident happened and shared a photo of her damaged car to substantiate her case.

In the photo, Bibi Bright’s car had its window damaged.

According to the actress, she drove past some young men who wore NDC T-shirts.

She indicated that the young men waved at her and she also waved at them thinking it was a sign to depict that they had accepted defeat but she returned to the car park only to find out that her windscreen was damaged.

She further disclosed that people around told her that the young men who waved at her broke her side window and bolted after committing the barbaric act.

Bibi Bright shared a photo of her damaged car with the caption:

“I am Ghanaian before anything, there is nothing wrong if I endorse a political party. This is wrong!
.
.
Packing my car, 2 boys in ndc tshirt shouted my name and waved, I waved back at them. I was called a few mins later that boys that waved at me when I packed just broke my back glass window and run away.
.
.
I don’t even know how to feel about this.”