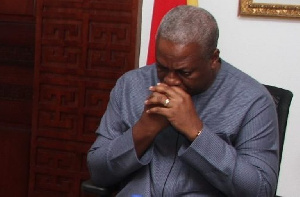 [VIDEO]: Mahama will be thrown in jail before the 2020 Elections – Kofi Akpaloo claims

Founder and Leader of the Liberal Party of Ghana (LPG), Percival Kofi Akpaloo is of the view that former President John Dramani Mahama and a number of his appointees will be jailed before the 2020 general elections.

John Mahama has been accused by the NPP of supervising the worst corrupt regime in the history of this country amidst several scandals including the Ford Expedition deal, SADA, SUBA, Bus Branding, Woyome judgment debt, the famous airbus scandal among others.

Nonetheless, Kofi Akpaloo is hoping for the narrative to change ahead of the upcoming general election as he has stated NPP’s intentions to jail any appointee from the previous government who misapplied public funds.

“The candidates for prison are Mahama Ofosu Ampofo, Kwaku Boahen. If Sammy Gyamfi jokes he will also join them. Let’s mark it down, very soon, they will all lavish in prison. He’ll vote there. NDC members should go look for other jobs. I am not scared. I’m stating this with authority,” he established.

The LPG party founder who seems to be so sure about his assertion says the NDC should go search for other jobs to do because their flagbearer will be jailed.

“NDC members should do the needful and go search for other jobs. What is coming will take them by storm,” he added.

Also touching on the Airbus saga, Mr. Akpaloo stated that John Mahama made a huge mistake by allowing Sammy Gyamfi and Marrietta Brew Appiah Oppong to speak on his behalf after he was given ample time to clarify issues.

“We gave him up till yesterday to speak on the issue and he sent Sammy Gyamfi to organize a press conference. What he sent Marrietta and Sammy Gyamfi to come and tell us is rubbish,” he added.