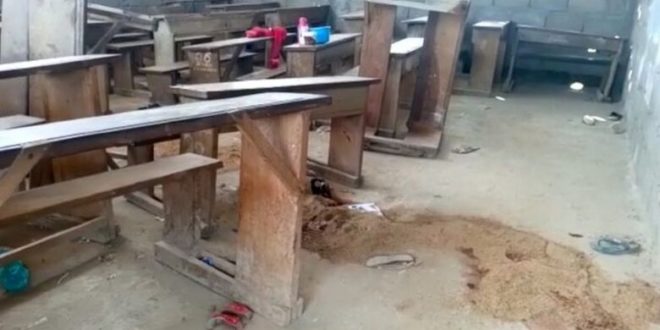 Gunmen have stormed a private school in a restive area of Cameroon killing at least six children and wounding a dozen others, officials say.

Officials in the south-western city of Kumba blamed Anglophone secessionists for the attack. This has not been independently confirmed.

A local education official said the victims were aged between 12 and 14.

Parts of Cameroon have been gripped by unrest since Anglophone groups stepped up their push for independence in 2016.

Some schools in Cameroon’s Anglophone regions have recently reopened following a four-year shutdown due to threats from separatists fighting for an independent state of Ambazonia.

Gunmen stormed the Mother Francisca School around midday on Saturday after arriving on motorcycles. Some children were injured when they jumped from second floor in an attempt to escape the attack.

“They found the children in class and they opened fire on them,” city sub-prefect Ali Anougou told the Reuters news agency.

It was not clear why the school was targeted, but the sub-prefect said secessionist insurgents were behind the attack.

However a secessionist leader said a statement would be released expressing “disgust” at the killings.

What is the conflict about?
Protests over the increasing use of French in courts and schools in Cameroon’s English-speaking heartlands, the North-West and South-West regions, morphed into violence in 2017.

A security force crackdown led to some English-speaking civilians taking up arms against the government, led by the French-speaking President Paul Biya.

Thousands have lost their lives and hundreds of thousands have been displaced as separatists and security forces clash.