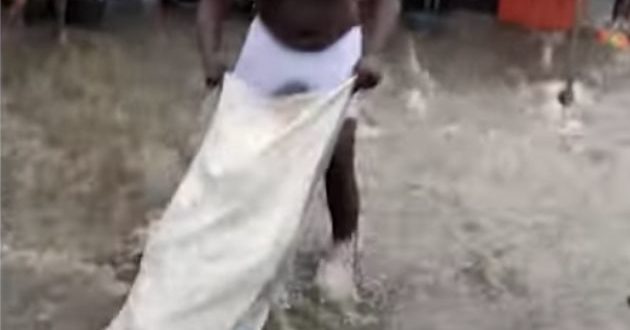 Share
The Police in Accra have arrested a man seen in a viral video dumping refuse into floodwaters at Ashalaja market during last week’s downpour.

The culprit is said to be a chief identified as Nii Ofei.

Confirming his arrest to Citi News, Director of the Public Health Department of the Accra Metropolitan Assembly, Florence Kuukyi, said her outfit is determined to bring to book, persons who violate sanitation laws.

Some urban dwellers have been seen taking advantage of run-off water during downpours to dispose of their personal refuse.

In 2019, for example, a landlady was fined GHS 2,400 after two of her tenants were captured on camera disposing of refuse in run-off water on a road during a downpour.

This was after she pleaded guilty to two counts of breaching section 56 of Act 851 of the Public Health Act.