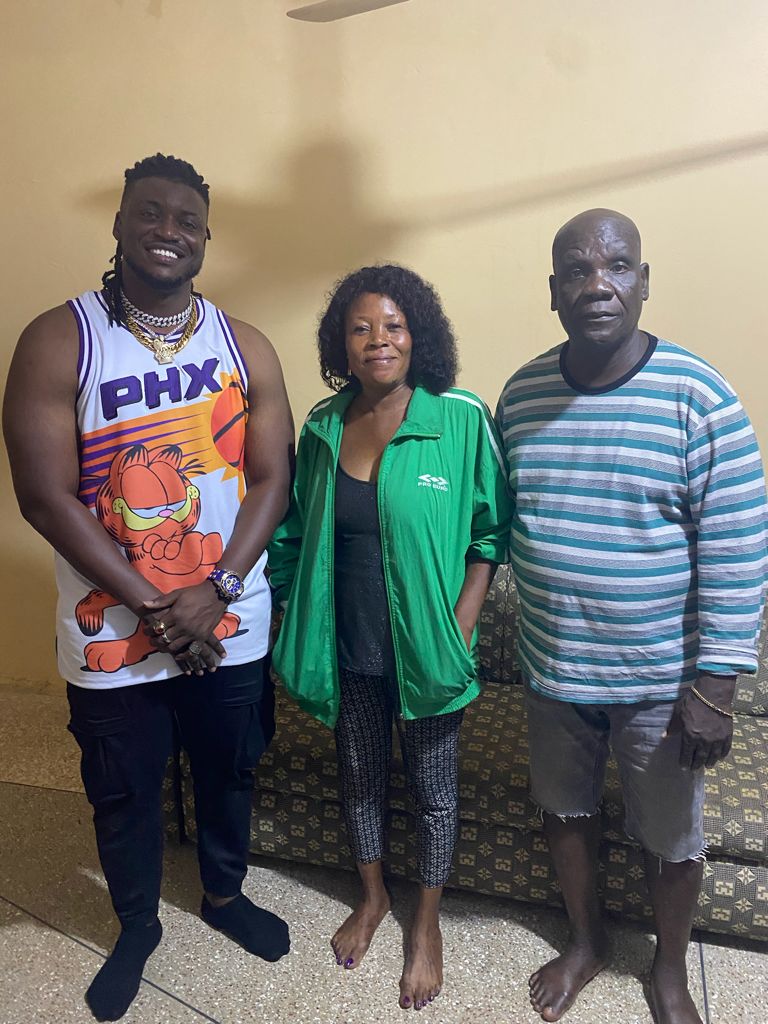 Fast-rising Ghanaian musician and businessman Gambo, has paid a surprise visit to Cofie Eshun, the father of the late hiplife legend, Theophilus Tagoe who was popularly known in showbiz as ‘Castro Under Fire’.

The visit formed part of activities of his Takoradi media tour.

The ‘Drip’ hit maker says he thought it necessary to pay his respect to the family of one of the greatest Ghanaian musicians that ever lived.

Castro’s father was highly thankful for Gambo as an up and coming musician to do the needful by visiting him.

Mr. Eshun observed how other musicians visit Takoradi to do their media tour but do not bother to pay him visit upon all that his late son did for the Ghanaian music industry.

He prayed for God’s blessings upon Gambo’s music career just as he would have done for Castro if he were still alive, expressing how he deeply misses his son.

Gambo was humbled by the kind words and prayers from Castro’s father.

He was also humbled by the great reception he enjoyed in Takoradi, saying his overall experience in Takoradi has been one of the best so far in his tours.

He expressed gratitude for the great support he enjoyed in Takoradi.

‘Castro Under Fire’ disappeared on the 6th of July, 2014 at the Beach in Ada during a jet ski with Janet Bandu, a female friend.

Reports indicated at the time that the two, while on holiday with the Gyan brothers opted for a jet ski cruise at a resort close to the Ada estuary and they never returned jetting but their jet ski was later found with a life jacket hanging on it.

Gambo is poised to become the face of Ghana music in the new future, with the release of his ‘New Era’ Extended Play.

The ‘New Era’ EP was launched on June 18, 2021 and has seen Gambo featuring the likes of veteran rapper, Ayigbe Edem, Strongman, Medikal and Sefa.

There are five tracks off the “New Era” EP. The EP is dominated by current trending stars in Ghana.

Gambo is deeply emotional about the song.

According to him, the song is one that anyone who has experienced a broken-heart can listen to and console themselves.

The track is off his Extended Play (EP).

He recorded the song when he was in love and suffered a brutal broken-heart.

The premiere attracted several A-list artists, with live performances from Kechi and others.

‘Drip’ was the first song off Gambo’s Extended Play. The banger is available on all major streaming platforms including YouTube, Audiomack.

Previous Zebilla: Seven injured in another accident
Next Agenda 111 Hospitals: Another hoax?