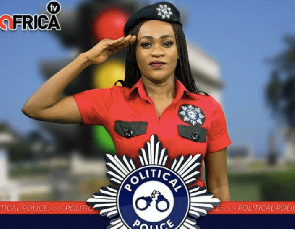 Her appointment comes a few weeks after Afia Schwarzenegger left the TV station.

The teaser for the new show, sees Aba Guyguy promising to be a capable replacement for Afia Schwarzenegger.

She wrote on Instagram: “Tick tock ! Tick tock! Tick tock !………Temperatures are rising …. anxiety is building… tables are shaking all because there’s an eye watching every politician …Join corporal Aba Guy Guy this and every Tuesday and Thursday on TV Africa as we scrutinize current economic political issues and scandals we will arrest them by the mouth but it beats the handcuffs …. we are political police!! Mr politician you are not so safe … just do the right thing .”