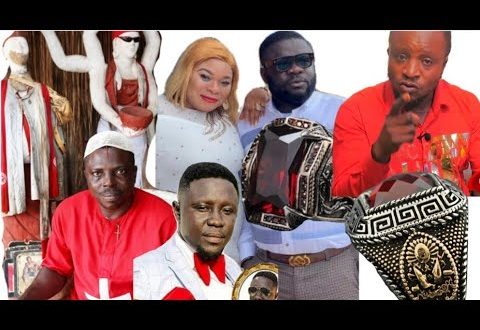 Agya Nkuta sacked from one-week ceremony of his junior pastor

Computer Man has planted the idea of me having a death in Major’s death in the minds of his parents, says Agya Nkuto

The founder and leader of Hope Generation Ministries, Prophet Eric Amponsah, alias Computer Man, has reacted furiously to some allegations levelled against him by Agya Nkuto.

Prophet Samson Agyei also known as Agya Nkuto, who is the General Overseer and Founder of Power Cathedral International, following the death of one of his junior pastors, accused Computer Man of maligning him to the family of his deceased junior.

Agya Nkuto in an interview among other things, alleged that Computer Man has turned the family of his late junior pastor against him by accusing him of being behind the death of his junior pastor identified as Major.

But reacting to the allegations, Computer Man denied making such allegations but noted that he only reproduced information that was divulged to him by the late junior pastor of Agya Nkuto.

According to Computer Man, the late Major revealed to him that he and his boss had over the period engaged in several ritual activities, some of which caused his sickness, eventually leading to his death.

“Major said you had a covenant with him. He said Agya Nkuto wears a big ring that was given to them at a shrine. It was four and they were made to swallow one each,” Computer Man told Oman channel.

He went on to allege that Major begun suffering from health complications after the ritual and was later diagnosed with kidney failure which resulted in his death.

According to Computer Man, Major before his death confided in his own family and him as they were told about things the late junior pastor and his boss had engaged in.

He noted that Agya Nkuto on various occasions undermined his junior pastor including causing his relationships to collapse.

Meanwhile Prophet Samson Agyei in an interview with Oheneba Media disclosed that the family of his late junior pastor sacked him from his one-week observation and prevented him from observing the event.

While denying having a hand in the death of Major, Agya Nkuto said “he is dead and how we can hold a befitting burial for him should be the focus. Would I kill him to use his body for soup? What will kill him for? But he has ended up planting that idea in the minds of the boy’s parents. Because of that I went for the one-week observation yesterday but they sacked me.”

Previous Gari processing, the mainstay of Sekesua residents
Next Armed men shoot and kill one, injure four others at Nkroful