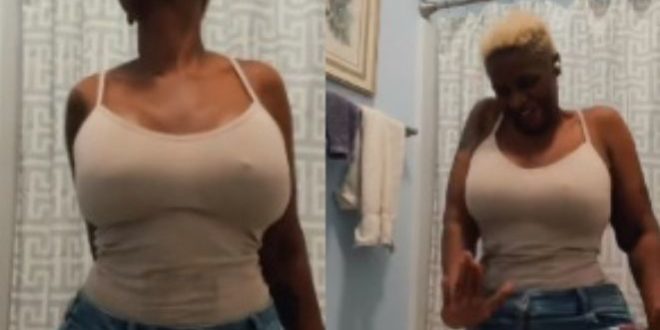 Popular Ghanaian socialite, Ayisha Modi, has surfaced on the internet with a banging body she claims to have spent $40,000 to get.

In a video she shared of her dancing seductively on Instagram, she exposed her nipples in a sleeveless top she matched with a pair of jeans and a golden hair while in a bathroom.

The video shared on May 18, 2022, was accompanied by a caption that read, “The enemy is not after your money or your stuff. He wants your mind. Your attitude. Your heart. Your faith. Your peace.

“Understand that you’re not being attacked over the tangible things in your life, the enemy is fighting you over the things can’t see.”

In an earlier development, Ayisha Modi claimed that she has spent a whopping sum of $40,000, an equivalent of GHC250,000 in a bid to lose an overwhelming amount of weight.

Ayisha who once had a plus size figure said she spent so much money and resources to maintain her current slim look which most people have criticized on social media.

Her comments were in reaction to Afia Schwarzenegger’s claim that Ayisha’s weight loss was as a result of drug abuse.

Ayisha among other things disclosed that she was motivated to enrol on a weight loss plan after a visit to the hospital revealed that she had a body mass index of 408, a little over the normal index.