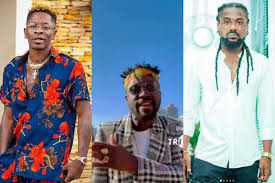 American-based Ghanaian rapper, Asem, has decided to have a slice of the hot ‘beef cake’ Shatta Wale and Samini are serving music lovers currently.

The rapper took to his Twitter timeline yesterday to announce that he will soon drop a diss song for Shatta Wale just to teach him a big lesson.

According to Asem, the decision to do this is because the Shatta Movement Records boss has crossed a line he shouldn’t have crossed though a lyrical beef has no boundaries.

“Bandana is being disrespectful. There are no rules in beef but certain lines we don’t cross. We don’t bring mums into a street fight. That’s foul and below the belt. Time to teach him a lyrical lesson of how to do a Proper dancehall diss song. ASEM #Musicalking #Magician.”

Well, just as he promised he has dropped the song on his Twitter timeline for fans to enjoy.

Check it out below: