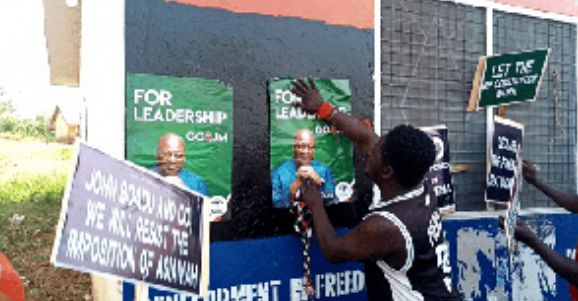 They demonstrated against “A no polling station election” in that area.

Earlier some aggrieved youth of the party vowed to reject any move by the party to impose the 2nd Deputy Speaker, Andrews Asiamah on them.

The youth have also questioned the rationale behind the exemption of the constituency in the polling station executive election.

Addressing the media on Wednesday, February 23 in Fomena, Micheal Ankapong, aspiring youth organiser said: “we will resist any attempt by NPP party executives to impose the independent candidate together with his supporters on the faithful NPP supporters within the constituency.”

The youth have alleged, the leadership of the party met the independent candidate.

“Some executives have met with the Independent candidate for Fomena constituency, Hon. Andrew Amoako Assiamah to bring on board his supporters to contest on party internal elections,” he said.

Communication Director of the party, Yaw Buaben Asamoa failed to provide reasons for the exclusion of the Fomena constituency in the polling station elections.

“We didn’t give reason before and we won’t give any reason now, this is a purely internal affair,” he told TV3’s William Evans-Nkum.