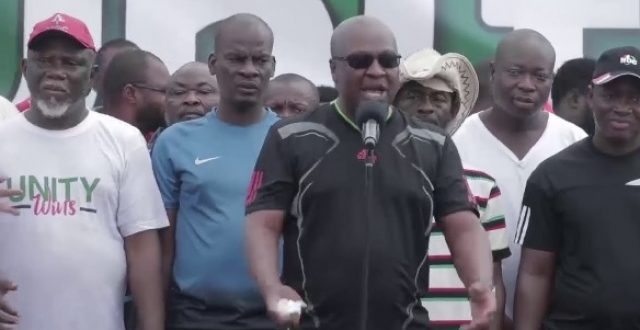 Former President John Mahama has accused the “desperate” governing New Patriotic Party’s Akufo-Addo administration of using the Criminal Investigations Department of the Ghana Police Service to “constantly harass” the main opposition National Democratic Congress’ National Chairman, Mr Samuel Ofosu-Ampofo, with “very useless, frivolous and vexatious” allegations.Hours after the CID invited Mr Ofosu-Ampofo for questioning over the recent spate of kidnappings and fire outbreaks in the country, Mr Mahama, on Wednesday, 8 May 2019 told party supporters during his tour of the Odododiodoo constituency in the Greater Accra Region that the NPP’s desperation to hang on to power is making the party and the government abuse the police in hounding opposition members.“Let us all work hard and let us make sure that we go from corner to corner because I know in my heart that the 2020 election, NDC is going to win and come back to power”, Mr Mahama, who is the flag bearer of the NDC charged his supporters, adding: “No amount of harassment of our national chairman will save the NPP from defeat”.“Indeed”, Mr Mahama said: “It is a sign of desperation that the Chief Executive of our party, the chairman of our party is constantly being harassed by the police authorities”.“But let them remember that they are setting a precedent, let them remember that in everything they do, they are setting a precedent”, Mr Mahama warned, reiterating: “You cannot take any frivolous and vexatious investigation and be inviting the national chairman of the biggest opposition party every day to the CID headquarters on very useless allegations”.“We are advising the NPP: if you deliver on your promises, the people of Ghana will look favourably at you, but if you have failed, don’t, out of your desperation, decide to harass our party officials. Whatever you do, you cannot escape the judgment of the people. And on 7th December 2020, the people of Ghana are going to decide no matter what harassment you subject our people to. And I know that that judgment will go in favour of the NDC”, he said.A letter from the CID to Mr Ofosu-Ampofo said: “The Criminal Investigations Department (CID) of the Ghana Police Service has commenced investigations into cases of kidnapping and fire outbreaks in various parts of the country. Intelligence gathered indicates that some of these kidnappings and fire outbreaks are being orchestrated by various unidentified groups, persons and individuals”.“Some of the persons picked up for interrogation and investigation have mentioned your name as part of a grand scheme designed to cause fear and panic in the country. As a result of the above information and intelligence, you are kindly requested to report to the undersigned on Thursday 9th May, 2019 at 2 p.m. to assist in our investigations”.The police administration in a statement assured the public that due processes will be followed in the investigation.“As a result, the public and ‘supporters’ of Mr Ofosu-Ampofo are advised not to besiege the Police/CID Headquarters. Also, journalists are reminded to follow due protocols of relations between the media and the police on coverage of police events. Live coverage of the interrogation or interviews from the Police/CID headquarters is not permitted”, the statement issued by the Police Public Affairs Directorate stated.A few months ago, Mr Ofosu-Ampofo was heard on a leaked tape, which he claims has been doctored, giving his support to NDC supporters to attack the Chairman of the National Peace Council and the Chairperson of the Electoral Commission.He has since been charged with conspiracy to cause harm and assault against a public officer alongside a deputy National Communication Director of the NDC, Kweku Boahen.Source: Ghana/ClassFMonline.com