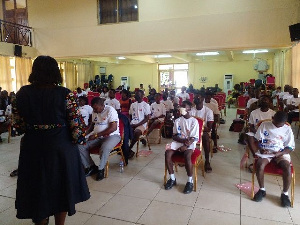 Some fifty selected men, boys including religious leaders in the Volta region have received a two-day education on gender equality and prevention of Sexual and Gender-Based Violence (SGBV).

The participants were selected from North Tongu, Central Tongu, South Dayi, Akatsi North, Afadzato South and Ho districts which are United Nations Population Fund (UNFPA) focused areas in the Volta region, the theme for the engagement was “Accelerating action for gender equality and prevention of SGBV, the role of men and boys”.

Mrs. Thywil Eyra Kpe is the Volta Regional Director in charge of the Department of Gender speaking to Journalists after day one of the training in Ho mentioned why the involvement of males in gender equality is relevant.

The workshop was also focused on how to end child marriage and teenage pregnancy in the region.

On his part, Volta Regional Director in charge of the Children’s Department, Mr. Isareal Akrobotu said to end child marriage and teenage pregnancy in society, men and boys must always be involved.

He also urged parents, community leaders to nuture children under good principles that will inure to the benefit of them, their families, and society at large.

The workshop was organized by the Department of Gender with support from UNFPA through the Volta Regional Coordinating Council (VRCC).