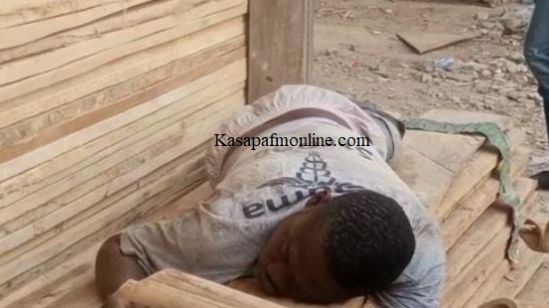 Share
An unidentified man, believed to be in his late 20’s has been found dead at Pokuase in the Ga North Municipality of the Greater Accra Region.

According to reports, the yet to be identified body was found lying motionless and unwounded in the early hours of Wednesday, April 6, 2022, at a Saw Mill adjacent to the Pokuase bus stop

Information gathered by Kasapa News‘ Akokoraba Nyarko indicates that the said place is has gained notoriety for immoral activities at night.

Speaking to Akokoraba Nyarko in an interview, some eyewitnesses and workers in the area said, they suspect the victim may have engaged in drug abuse leading to his untimely death due to the notoriety of the area.

Others also described the death as spiritual explaining that he may have been cursed prior to his death while others say the man may have been beaten to death by his attackers and later dumped at the Saw Mill.

The body at the time Kasapa News reported the incident was still lying unattended by the Police even though several efforts were made to contact the Pokuase police command.

Meanwhile, residents of the Pokuase Saw Mill are appealing to the police to intensify security surveillance to eradicate the notorious and immoral activities at night.