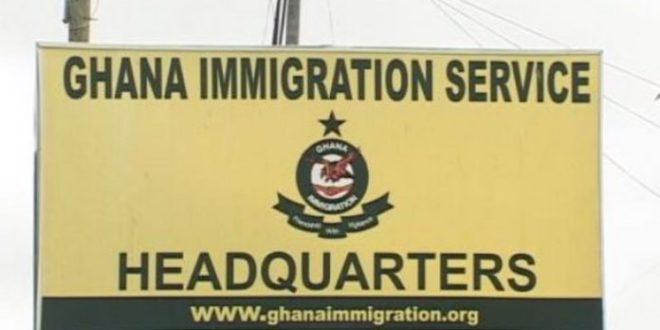 Two suspected recruitment scammers are in the grips of the Ghana Immigration Service (GIS) in Tema for allegedly defrauding about 30 unsuspecting victims of more than GH¢250,000.00.

The suspects are 46-year-old Awuah Forson, and his 71-year-old accomplice, Ekow Hackman.

The issue came to light after one of the victims became alarmed when she realised that the person she allegedly paid the money to was not a staff of the Service.

The victim reached out to the Public Relations Officer (PRO) for Immigration Academy and Training School, ASI Roland Aziz, who decided to follow up on the case.

He then planned with her on how she could meet the suspect and arranged for four officers from the Immigration Academy and Training School to travel with her for the meeting.

One of them pretended to be the victim’s brother who also wanted to enlist in the service.

The victim then called one of the suspects who agreed to meet her.

“At the hotel I told him I had a brother who also wanted to join the Service. Then he told me to send my brother’s money to him, but the Immigration Officer, who was pretending to be my brother, said if he hasn’t seen him [Mr Forson] there was no way he was sending the money to him. So the next day, when Mr Forson came for the money, he was grabbed by the officers,” she recounted.

“I was contacted by my PR in Assin Fosu  Immigration Academy and Training school that there was a recruitment fraud syndicate that needed to be apprehended before we lose them. So I immediately contacted our operations department to follow up on the story and apprehend the man, which they did after a very dodgy tactic by the suspect.

“The operations department here with the collaborative efforts from four other officers from Assin Fosu , with the help of the Commandant ACI Alex Adu and our Regional Commander, ACI Kojo Oppong Yeboah, were able to apprehend the man and his accomplice who are currently in our custody,” she said.

“I’m telling the general public, the Immigration Service does not sublet its recruitment exercise to either individual or group of persons. No. Every recruitment exercise is done by GIS and GIS alone under the Ministry of Interior. So we don’t sublet our recruitment process to civilians or men in uniform, no.

“My advice to the general public is that if you want your ward to be recruited into the Ghana Immigration Service, make sure you go through the right processes. Don’t pay money to any unscrupulous scammer,” he cautioned.