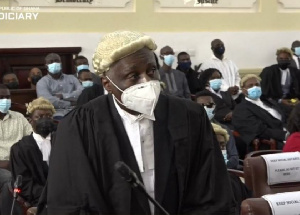 Tsatsu Tsikata, the lead counsel for John Dramani Mahama in the 2020 election petitioner, has explained that the constant reference to Jean Mensa, Chairperson of the Electoral Commissioner, is material to the ongoing election petition and that there is no intent of malice or ill will towards her.

According to him, the 1992 Constitution conferred on the EC Chairperson as the only Returning Officer of the presidential election so there is the need for her name to be mentioned and not to only refer to her designation as Nene Amegatcher, one of the Justices of the Supreme Court suggested.

Lawyer Tsikata during his submission on Day 21 of the election petition, constantly emphasised the EC boss’ name when he made a case for an application for 12 questions to be answered mostly by Jean Mensa, which should explain the facts of “what actually happened” versus what “is in the constitution” as suggested by Lawyer Justin Amenuvor, the counsel for the EC.

Justice Nene Amegatcher, JSC interjected Tsatsu Tsikata saying “we are not comfortable with” you mentioning her name. Justice Amegatse believes mentioning Jean Mensa gives the impression that the petitioner seeks to “attack” the personality of Jean Mensa.

He, therefore, suggested that Tsatsu Tsikata refrains from mentioning Jean Mensa’s name and rather address the office of the EC because, in her absence, any of her two deputy chairpersons can act on her behalf.

But Lawyer Tsikata objected, “My lord with the greatest respect, I believe that the constitutional requirement regarding the Returning Officer and the particular circumstances that we are dealing with in this case do not make it possible the situation that you are envisaging where somebody else steps in for the Chairperson.”

He affirmed, “So, My Lord, we do not mention her name by way of targeting an individual; that is very far from it.”

Tsatsu Tsikata further stated: “When I cited before you a decision of the Supreme Court and I cited the decision of Justice Gbadegbe as an individual judge, he read a unanimous decision of the whole Court; I did not target Justice Gbadegbe when I mentioned his name. Because he happened to read that judgement. Equally, I do not target Mrs Jean Adukwei Mensa when I say that she made the declaration on December 9, 2020. It is not a target, it is just a fact that is material in this particular petition.”

On Tuesday, the petitioner sought to ask Jean Mensa 12 questions relating to the role she played in the electoral process in a process called “interrogatories” following a precedent from the 2012 presidential election petition but the court declined the application on grounds that they were bound the 42-day rule governing the disposal of this case.

At the end of the day’s proceedings, Lawyer Frank Davis told reporters that the counsel for the petitioner had sought to delay the case.

On their part, Dominic Ayine, a former Deputy Attorney General who is also a member of John Mahama’s legal team responded to the reporters: “Did they think this was going to be a walk in the park? This is just the tip of the iceberg.”