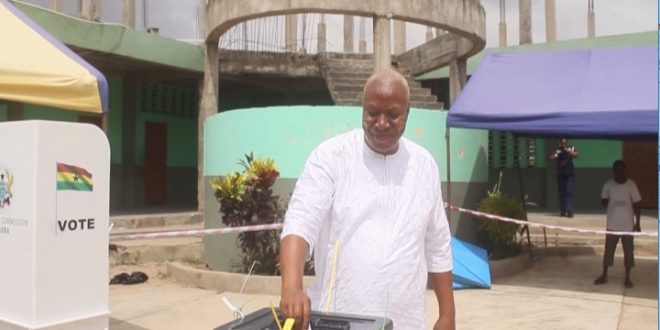 Top executives of the National Democratic Congress have intervened to get Prof. Joshua Alabi, whose name was missing from the party’s voters’ register, to cast his vote in the 2019 presidential primary of the party currently ongoing across the country.

Prof. Alabi who is one of the seven persons contesting the primary to lead the NDC into the 2020 general elections, was initially prevented from casting his vote at the St. Michael polling station in the Krowor constituency Saturday because his name was not on the register.

EC officials supervising the polls rejected pleas from the constituency chairman and director of elections to allow Prof. Alabi to vote despite his name missing from the register.

Despite the situation, which Prof. Alabi condemned and described as unfortunate, he remained resolute and stayed at the polling station to ensure that the issue was resolved.

Some national executives at the NDC headquarters who were informed about the situation quickly moved in to ensure the candidate was allowed to vote, our correspondent reported, noting they did so by placing some calls to the Electoral Commission headquarters.

“Alabi has now been able to vote,” Afreh-Nuamah reported.

“I’m happy that we’ve gone round the system, we’ve corrected it and I’ve voted,” a cheerful Prof Alabi told our correspondent.

He said his happiness stemmed from the fact that “that particular vote is going to be the winning vote for Prof Joshua Alabi to the flagstaff house [Jubilee House]”.

The presiding officer for the Krowor constituenc, Stella Aggor  justified her initial decision to prevent the candidate from voting, stating he was following the strict electoral rule of the Electoral Commission.

“Our directives are that you come and we check your name from our register and then you go through the process, but when he [Prof Alabi] came, we couldn’t find his name in the register so we couldn’t allow him to vote,” she stated.

She clarified that the mistake did not come from the EC as some may assume, saying “We didn’t compile the list, they [the NDC] did it from their office so that is what they gave to us”.

How was it resolved?

She said Prof. Alabi was eventually allowed to vote because she received instructions from the EC district office.

Earlier, Prof. Alabi had said the incident was a manifestation of what some of the aspirants in the primary had been complaining about in the last few months which according to him, the party has failed to address.

In his view, someone of his stature has suffered this fate, then a lot more ordinary members of the party could be denied their vote under similar circumstances.

“If Prof Joshua Alabi who happened to be a member of parliament for krowor constituency who has been voting all his lifetime here cannot find his name in his constituency, then you can imagine what will happen to other people who are supposed to be voting,” he noted.

Asked by our correspondent whether he suspect sabotage, he said: “I don’t know who did this but this shouldn’t have been a mistake at all,”.