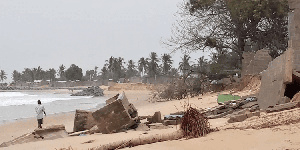 It has now emerged that tidal wave victims in some parts of the Ketu South Municipality in the Volta Region have not received any relief items because they rejected the items.

The National Disaster Management Organization (NADMO) says they made an attempt to count the victims and also ascertain what the victims needed but the victims openly told the NADMO officials they do not need relief items but a permanent solution to the problem of the tidal wave.

Five days after the tidal wave hit the area, no relief items had reached the victims because the municipal and regional offices of the NADMO did not have any relief items in stock for the victims.

The Municipal Chief Executive (MCE) for Ketu South, Maxwell Lugudor, had revealed on 3FM‘s Sunrise on Wednesday that they were waiting for the Volta Regional NADMO office to supply them with relief items.

Reacting to the development on Thursday, the Volta Regional NADMO Director, Ivy Amewugah Mawufemor, told host Alfred Ocansey that “it is true the items are yet to get to the victims”.

“They said they are not ready to receive rice and oil. They want a permanent solution to the problem, so we found it difficult to send letters to the headquarters to release items.”

Madam Amewugah Mawufemor continued: “We cannot place a request to the headquarters [NADMO] without figures so we needed to ascertain their needs before we place a call.

The Director explained that NADMO officials were able to convince the victims to accept the relief items while efforts are being made to respond to their demands.

“They have now agreed to accept the relief items but they told us point blank that they are tired of rice and oil because this thing happened four months ago. It has been the normal thing that when it happens, they receive such items. They now want a permanent solution which is sea defense. This is what they told our men on the ground, that anytime they suffer to get something, the rain will come and wash them away.”