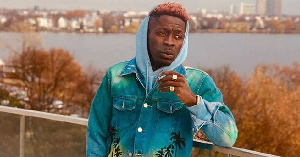 Ghanaian dancehall artiste Shatta Wale, who was previously known us ‘Bandana’ has opened up on one of his first songs ‘Moko Ho’ which featured Ghanaian musician Tinny.

Shatta disclosed in an interview with Rev. Erskine that the sum he made from the song could only cater for his rent at that time and nothing else.

“’Bandana from Ghana, Moko Ho’ only got me some cash to rent a place and lay my head but to say I got money from it; never. Royalties; never. The song was really big. I was even supposed to go to other countries for my tour and stuff but I couldn’t get that”.

Relating the circumstances that ripped him off gaining from his hard work, he shared: “It was due to the structure of this industry that we are still trying the resolve the associated issues. I think the song really took me somewhere. It opened doors for me. But Mark Okraku Mantey said people did not patronize my tapes. That is why I and Mark Okraku Mantey have issues up till now. That is why the whole thing looks like Shatta is disrespecting certain people in the industry. No. He [Mark] knows the history”.

Shatta Wale, then Bandana, collaborated with Tinny to release the track ‘Moko Ho(Bandana from Ghana)’ in the 2000s. The song made tremendous air waves in the Ghanaian music industry.