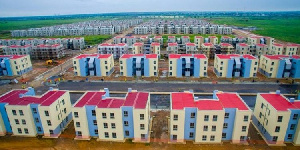 The National Tenants Union of Ghana (NATUG) has given the government a six-day ultimatum to rescind its decision to sell the Saglemi affordable housing project to private developers.

The association made up of 15 million members threatened to employ legal means to resist the move should the government remain adamant.

The Minister of Works and Housing, Francis Asenso Boakye, at a press briefing on November 13 had stated that the government was “allowing for a private sector developer to take up the initiative to build and sell the housing units”.

Justifying the reasons for the move, he noted that an amount of about USD 46 million is needed to provide water, electricity, and storm drains for the 1500 housing units.

But the “Government doesn’t intend to expand more on the completion of the project” and has therefore decided to sell the project to the private developer.

Registering their displeasure through a statement, the tenants argued that “in a country like ours where there’s neglect and irresponsible management in the housing system and growing disparities in income, cost of rent and wealth have been central to the problem of affordable housing to the ordinary Ghanaian.

“Privatization, therefore, undermines the very possibility of providing affordable housing for people who cannot afford housing above the market rate.”

“National Tenants Union of Ghana, therefore calls on the minister of Housing to revert its decision and convert the Saglemi housing project to social housing to create access to housing for the low-income population, Instead of derailing its original purpose to the private sector who are more efficient in profit maximisation.”

To them, the step taken by Nana Addo, the NPP government to privatize Saglemi affordable housing project is just another step toward dismantling public housing altogether.

Though they admit the engagement of the developer is to create jobs for some, it is to the group a “genocide of poor people” and a total Abandonment of hope for the poor.