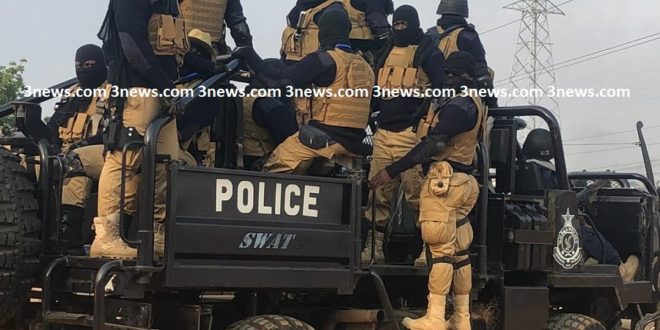 Mr. President, I greet you from my base somewhere in the Greater Accra Region. This piece will be the fourth – I think – I am writing to you since you became president of the Republic of Ghana.

I am tempted to believe that with many, including me, complaining of hard times in the country, you will assume my focus will be on such. Well, that would probably be a subject for discussion on another day. Today, I would kindly engage you on last week’s incident that yet again soiled your government’s reputation; the La Bawaleshie Shootings during the by-election at the Ayawaso Constituency, I mean.

As you are aware by now, Mr. President, an army of trigger-happy men in balaclavas on Thursday, January 31, 2019, got the nation talking when they went gaga shooting and slapping some persons at the La Bawaleshie Presbyterian Basic 1 School in Accra.

“Some heavily armed masked men invaded [NDC’s] Delali Kwasi Brempong’s house behind the La Bawaleshie Presbyterian Basic 1 School which was serving as a polling center in the by-election. Persons in the storey-building [Delali’s house] were said to have been ordered down and before they could comply, the armed men started shooting, injuring at least six persons who are currently receiving medical attention,” reported 3news.com.

These men in balaclavas, some media reports suggested, are National Security operatives. Mr. President, others however said they are some of your New Patriotic Party’s hoodlums; members of the vigilante group, Invincible Forces.

Whoever they are their actions and inactions were as unprofessional as the word itself. And, it comes to add up to the numerous insecurity instances we have experienced under your watch.

The other day, we had some cotton-headed men storming a court house in Kumasi to free their colleagues standing trial. In all these, we have not seen you taking concrete measures to clamp down the operations of these hoodlums except for your usual sweet oratory of condemnation. Hmmm!

If what others suggested that the men who masked themselves are members of the National Security, then, Ghana is on the verge of collapse. Indeed, National Security personnel going about their duty in spraying shots and gifting slaps and later running away should tell us that all is not well. We might perhaps help them seek ‘recovery’ from the curer of sick heads.

If they [hooded men] had gathered intelligence that some group of persons were planning mayhem, was that the best approach? Were these would-be evil doers as fearful as the Al Qaeda or Al-Shabab that combating them demanded hooded men? We have this level of security and just one idiot of a kidnapper in the cells of Takoradi, who after breaking jail and after his re-arrest, is being served ‘tea and salad’ breakfast to get him talk?

Mr. President, did you please read the police’s statement on the La Bawalewshie Shootings? The statement dated February, 1, 2019 signed by the Director of Public Affairs of the Ghana Police Service [GPS], Sheilla Kessie Abayie-Buckman, calls for the GPS to be dissolved immediately. I hold a strong conviction that without the police, Ghanaians would live a better life.

“Anybody with information on the incident should call 0244623866, 0242814863 or the police emergency toll free 191 (all networks) and 18555 (MTN and Vodafone). Persons with credible information can also send an email to police through [email protected] / [email protected],” the statement read.

If I were you, Mr. President, the Inspector General of Police, David Asante Apeatu, would have been fired by now together with Sheilla Kessie Abayie-Buckman for insulting the public with this statement. What the police is asking of us is like a researcher reaching out to his/her respondents – knowing their sex – and yet asking ‘Are you a male or female?’

Was the police not around when the thugs of so-called National Security operatives went about displaying acrobatics of weaponry? Were the hooded men not in branded police vehicle; SWAT for that matter? Were they not driven by a police officer? Who gave them that vehicle? And so, why will the police release this useless statement to solicit for information on the ‘culprits’ they know already?

Mr. President, as a citizen and not a spectator, I am very much pissed!

Last year when Sweden went to the polls, citizens had in their rooms the ballot cards weeks ahead of the main date for the election. The ballot cards were posted and delivered to the country’s citizens. They had the privilege of going to designated points to vote ahead of time. And, from my international media monitoring and some citizens I spoke to, nobody died or gunshots heard because there was an election.

In Ghana, even when the ballot sheets are kept at the police station, people break into such stations to take them away. I woke up the faithful morning of the by-election to see hundreds of messages from some groups on WhatsApp that people were being shot at.

In Sweden last year, I saw that the country was overly civilized. Can same be said of our country, Sir? Mr. President, would you agree with me that the good people of Ghana have left politics in the hands of some undeserving folks? Is our politics not posing enough threat than that by Al-Shabab to Kenya?

Former President John Dramani Mahama commenting on the Ayawaso commotion said, “I want to sound a caution that NDC has a revolutionary root and when it comes to unleashing violence, no one can beat us to that.”

Our elders say, “When a witch attends a funeral, she meets satan himself.” In plain words, this is NDC’s message to the NPP that ‘You do me, I do you!’ But, does this game of dirty politics not leave us as a nation in a rocking chair?

In 2018, I wrote on my Facebook wall that, “Individually, as Ghanaians, we are progressing. Collective as a nation, we are fast retrogressing. I think we have not had many politically sensible leaders. The saddest part of the narrative is when most of our politicians think with their stomachs instead of their brains.” Fortunately or unfortunately, I still stand by this.

Ace investigative journalist, Anas Aremeyaw Anas, once opined that, “When evil men destroy, good men must build and bind.” In this instance, when politics become so dirty that it takes away one’s sense, forcing them to spill blood to either stay in power or come into power, ‘good men’ must build and bind. And, I trust you are capable enough to call for order whether within your party or in any of the opposition parties.

At times, I am tempted to ask you, “Na bͻkͻͻ deɛ?” To wit “Is everything under control?” I, on many occasions, sense you humming to Kofi Kinata’s Confession, looking at the chaotic front of the nation’s security among others.

Mr. President, rise up and tame the untamed in your government for it is you we voted for. Rise up and build a solid foundation of a legacy that generation upon generation will attest to that, indeed, there was once a president of Ghana. You have achieved everything one needs to achieve in life. So, please do not let your presidency end your beautiful life story like that said of the tail end of the lizard’s faeces.

The writer is a broadcast journalist with Media General (TV3/3FM). Views expressed here are solely his and do not, in anyway, reflect the editorial policy of his organisation.