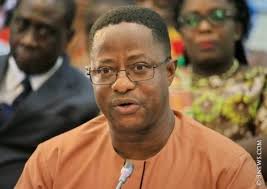 The Supreme Court has declared as null and void, the Ho High Court’s interim orders of injunction against the Electoral Commission (EC) from gazetting John Peter Amewu as Member of Parliament-elect for Hohoe; and for Mr. Amewu from parading himself as having been elected Member of Parliament.

Though the Court notes in its 40-page judgment read by President of the 5-panel bench, Yaw Appau, that the interim orders by the High Court in Ho died a natural death, the Supreme Court said, John Peter Amewu, though a beneficiary, had nothing to do with the denial of the rights of the residents of the SALL area to vote.

The Court also agreed with the Attorney-General’s argument that the aggrieved parties went to the Court with an election petition disguised as a human rights issue.

The Court has however denied in part, the Attorney General’s plea for an order of prohibition against the High Court’s continual hearing of the matter.

According to the judgment, it is for the trial court to determine whether the right to vote is a fundamental human right accruing to the interested parties.

But the Court declined to pronounce on the constitutionality of C.I. 128 as contended by lawyer for the SALL residents, Tsatsu Tsikata.

The Ho High Court on December 23, 2020, presided over by Justice George Buadi granted an interim injunction restraining the Electoral Commission from gazetting Mr. Amewu as the MP for Hohoe.

This followed an ex parte application filed by residents of the Guan District who were not given the opportunity to vote in the parliamentary elections on December 7, 2020.

Eligible voters within areas in the newly created district; namely Santrokofi, Akpafu, Likpe, and Lolobi, were only allowed to take part in the presidential election but could not vote in the parliamentary election because a constituency had not been created for them.

The applicants demanded the enforcement of their fundamental human rights to vote.

The State through a Deputy Attorney General, Godfred Dame, subsequently filed a motion at the Supreme Court to fight the injunction placed on Mr. Amewu.

The court on Monday, January 4, 2021, overruled an interim injunction challenging the empanelling of Justice Clemence Honyenuga to hear the case.

Meanwhile, Godfred Dame after the Supreme Court’s ruling on Tuesday, said: “We are happy and very much satisfied with the directives of the court”.