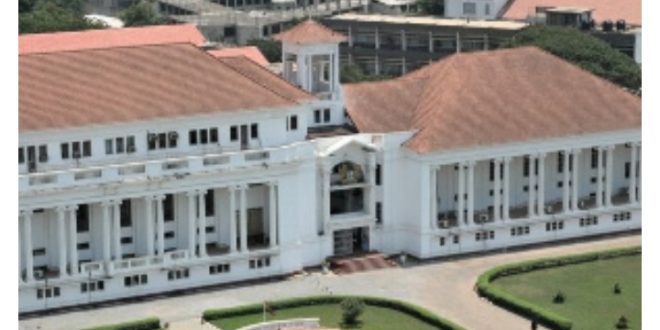 Share
The Supreme Court has adjourned to March 29, the hearing of an injunction application against James Gyakye Quayson, Assin North Member of Parliament.

The seven member panel adjourned the injunction following the filing of a review application in relation to ruling of the court on March 8 and application for stay of proceedings.

The Court had formally slated today, Wednesday to commence hearing of the injunction application filed by Mr Michael Ankomah Nimfah, a resident of the constituency against the MP.

On March 8, the Supreme Court ordered the legislator to file his defence in the case after it had ruled that the MP had been sufficiently given notice of the case following publication of a substituted service in the Daily Graphic Newspaper.

A letter from one of the lawyers of Quayson who also applied for the court processes also indicated the MP was also aware of the matter.

Mr Nimfah is praying the court to restrain the MP from holding himself as such.

This follows the judgement of a Cape Coast High Court barring him from holding himself as a legislator.

The Cape Coast High Court held that the MP held allegiance not only to Ghana.

At the Supreme Court on Wednesday, Justice Victor Jones Dotse, presiding, indicated that the Chief Justice would empanel judges to hear the review application.

According to the Court, “in view of the filing of the review application and motion for stay of proceedings, hearing of the interlocutory injunction will be adjourned and depending on the outcome of the two applications, the panel will proceed to hear the substantive matter (injunction application).”

Earlier, the Court noted that the two applications were filed on Wednesday March 16.

Additionally, it came to the attention of the Court that, counsel for the MP, one Mr Terry Waja, had applied for the processes of the Court on March 14.

Mr. Frank Davies, Counsel for Mr Nimfah, held that the two processes filed by Quayson’s lawyer should not prevent the Court from hearing the injunction application.

He drew the attention of the Court to the fact that the its orders on March 8, 2022 were clear.

A Cape Coast High Court in July, 2021, annulled the Assin North Parliamentary elections when it ruled that Mr Quayson owed allegiance to another country other than Ghana when filing his nomination forms to contest the polls.

Following the decision of the High Court, the MP had moved the Court of Appeal and subsequently to the Supreme Court.

Previous Police refusing to release Oliver after court order, activist back on hunger strike – #FixTheCountry
Next Fuel prices shoot up by 18.2%, cumulative rise in 2022 at 53.9%