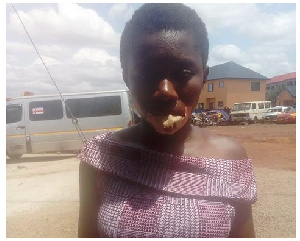 The suspect, Itikan Hussein, also 17, has since been arrested by the police at Suame.

Narrating the sad incident to DAILY GUIDE, the victim, who could hardly speak, said she had lived in the same vicinity with the suspect at Bohyen, a suburb of Kumasi for the past two years.

The suspect, she alleged, had tried to fight her ever since her family relocated to Bohyen about two years ago, claiming “I do not really know the crime I have committed against her.”

On Wednesday, May, 13, this year, Itikan allegedly rained insults on the victim and her younger sister all day and vowed to beat the two sisters wherever she met them.

At about 9:30 pm the same day, the suspect started a quarrel with the younger sister of the victim called Akua and when the victim who was attending to the call of nature at a public toilet got to the scene, the suspect turned to her (victim) and began to insult her too.

“I collected 50 pesewas from my mum to attend to the call of nature and when I got out, I saw Itikan insulting my sister so I told her to escort me to the toilet. As soon as I said this, Itikan called me ‘sickler, you are the one I am looking for,” she recounted.

She claimed before she could utter a word, Itikan and her other sister rushed on them and started beating them while their mother was allegedly standing nearby watching them fight.

The victim said the mother of the suspect allegedly held her hands at the back while her daughter punched her repeatedly.

“I felt a sharp pain on my lower lips and when I said ‘Itikan has bitten off my lips, the suspect’s mother told me she wished her daughter had chewed off my mouth’,” the victim alleged.

The victim was later rescued by her brother, Richard Amoah, who rushed to the scene and took her sister home.

She was rushed to the County Hospital at Abrepo for treatment after which her brother lodged a formal complaint at the Suame Police Station where the statements of both the victim and the suspect had been taken.

Meanwhile, a source at the police station that confirmed the incident said the suspect would be given a police enquiry bail before she would be arraigned.