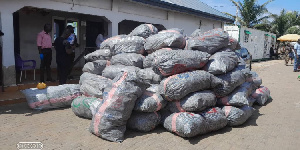 Officers of the Ghana Armed Forces have impounded over 150 bagged substances suspected to be cannabis at Wudoaba in the Ketu South municipality.

The illicit substances were intercepted following the arrest of a Benz Cargo truck with registration number GE8404-13.

The incident led to the arrest of the driver of the vehicle, identified as Vincent Abo, and his two accomplices, Ahiawo Kodzo and Seth Hefu.

According to a report by Oyerepafmonline.com sighted by GhanaWeb, the suspects together with the exhibits will be transported to the Narcotics Control Board Headquarters in Accra for further investigation.

The suspects, who are all natives of Ho, were said to be transporting the banned substance to Nigeria, Togo and Benin.

Speaking on the development, the Municipal Chief Executive for Ketu South, Maxwell Lugudor, expressed worry about his jurisdiction becoming a hub for such illegal activities.

He, however, noted that the assembly is resolute in combating the growth and trading of illicit drugs in the area.