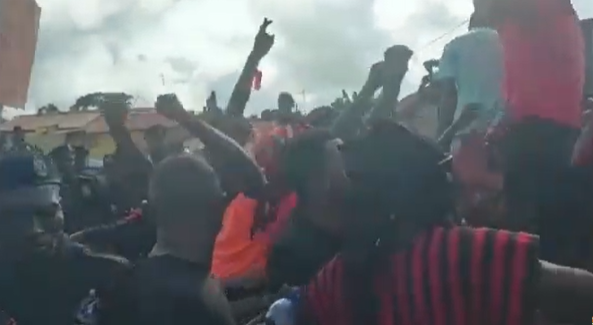 The chiefs and residents of Sokoban in Kumasi of the Ashanti Region on Monday took to the streets to demonstrate against the government over bad roads.

Clad in red attire, the irate residents blocked the main road while registering their displeasure with the government.

Their action caused heavy gridlock on the stretch and not even the intervention of the police could cause them to open the road.

Despite the area and its surroundings being home to thousands, a stretch of road in the township has been abandoned.

They have threatened that no politician would be allowed to campaign in the area for the 2024 election if their road is not fixed and will vote against the New Patriotic Party.

They have, therefore, as a matter of urgency, called on the government to come and fix the deplorable road which is affecting economic activities of indigenes and those in adjoining communities.