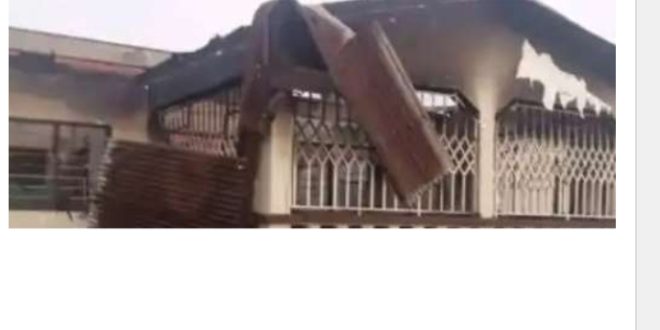 A/R: Raging fire kills husband and wife in their home at Gyinyaase

Per information gathered from the Ghana Fire Service in the Ashanti Region, the fire started shortly after midnight.

Personnel of the Fire Service deployed to the scene fought and managed to douse the fire but unfortunately, the harm had been done already.

The firefighters discovered the lifeless bodies of the couple.

Speaking to the media, the eldest son of the deceased, Kingsley Asante told journalists, “It was late in the night when I received a call from a friend. I decided not to answer, but the call came in several times, so I answered. When I picked, my friend broke the news to me. I took it as a dream because it was weird news. In my doubt, I received another call from my younger brother confirming my friend’s report.”

On his part, DO III Peter Addai who is a spokesperson for the Ghana National Fire Service narrated, “When we got to the scene the fire was well alight in a wooden structure used for domestic purposes and so when the fire was extinguished, we also realised that two people lost their lives.”

The deceased include Godfred Afenyo, 51 [the husband], and Happy Danso, 42, [the wife].

Previous SAD PHOTOS: Bride in coma after groom crashed to death on his way to their wedding
Next Be bold and drop Jordan Ayew – Otto Addo told