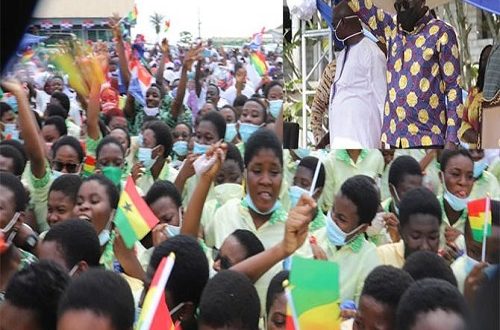 Senior High School students in the Akuapim South constituency could not help welcoming President Akufo-Addo to the constituency Monday morning.

This was when he visited the Aburi Girls Senior High School as part of his tour of the region.

The students mostly drawn from Aburi Girls SHS, Adonten SHS, Aburi Sec/Tech, Diaspora Girls’ SHS, and Obodan SHS lined up on the shoulders of the road leading to the Aburi Girls’ school campus amidst chants of ‘four more for Nana’, ‘four more to do more’ with others also chanting ‘Paapa oo dendei’ whilst waving at him.

The President in-turn responded with a wave of his four fingers signifying ‘four more’ years.

Addressing a charged crowd, President Akufo-Addo said the NPP has laid a solid foundation for a smooth take-off of the development of the country since they have the blueprint to Ghana’s development.

Aburihene, Otobuor Gyan Kwasi II who attended the event could not help but endorsed President Akufo-Addo, identifying him as one of their own kinsmen.

He later honoured him with the conferment of the title of ‘Ghana Manwerehene’ on him, calling on Ghanaians to give him the ‘four more to do more’.

Previous VIDEO: The story of a young Boy who was born different, bullies called him a monkey as he dwells in the jungle
Next Confusion guts NDP over the Presidential race