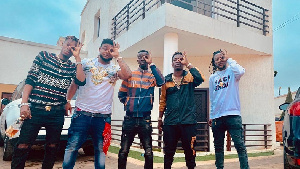 Dancehall musician, Shatta Wale, has made it official that he is no longer working with his militants, made up of Addi Self, Captan, Joint 77 and Natty Lee.

According to him, they are lazy musicians who aren’t ready to be in the limelight regardless of the music coaching tips he provides for them.

He made his fans and Ghanaians aware that he has sacked them since January and he is only coming out in May to address it because they are still doing music in his name.

Shatta Wale recruited the budding musicians in his team some years back to support his music craft where he releases seasonal songs with them.

One of the songs with them ‘Thunder Fire’, which was released in 2018, became a hit song and subsequently rose the bar for them.

Shatta Wale, in a Facebook Live video, looked angry and said he didn’t want them living in his shadows, hence the need to make it official that he has fired them.

I sacked them before January or in the middle of January. I have given them their pass yet they post nonsense songs like I wrote them for them and I don’t want that.

They are not good musicians. I only wanted them to do songs so people will support them so they can make money.

According to Shatta Wale, one of his militants, Addi Self, was the mastermind who urged the other militants to disrespect him.

Addi Self who can’t write, gangs up telling them that I am not doing anything for them. You militants, all the songs you guys wrote none. I wrote all your songs yet people think I am sabotaging you.

He climaxed the live feed by registering the fact that anytime he loses a team member, better things come his way.

The moment they live another opportunity comes to me. How is this happening? Even in the bank when you go late you will be sacked. I am working too hard, hence don’t let us be myopic.