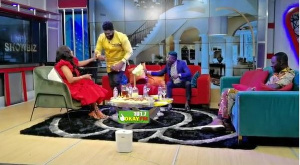 Bulldog and his artiste Shatta Wale were both on Nana Ama McBrown’s show on UTV, to talk about the happenings in the entertainment industry.

But as the show went on, Nana Ama McBrown and Shatta Wale joined forces to sack Bulldog from the set on live TV.

However the action was just out of fun as Nana Ama McBrown promised to call Bulldog back after sometime and the manner which they even sacked him could attest that they were just having fun.