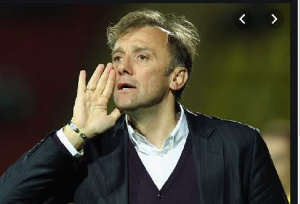 The Serbian first led the West Africans from 2011 to 2012, guiding the side to the semi-final of the Africa Cup of Nations in his final year in Gabon-Equatorial Guinea.

“I feel like I did not finish my job. But first, somebody must call me,” Stevanovic told Ashh FM.

“I know that Ghanaians have not forgotten me because I took charge of some of Ghana’s best games.

“I remember after the friendly with England [which ended 1-1], the England coach, Fabio Capello told me it’s one of the best games he had ever played.

“After the Afcon in Equatorial Guinea and Gabon, Andre Ayew told me I’m one of the best coaches he had ever worked with.

“I still speak to some of the players like [Michael] Essien, [Sulley] Muntari, [John] Painstil, so hopefully one day I can return.”

After parting ways with Ghana in 2012, Stevanovic was appointed head coach of Greek side Veria, whom he left after just two months to take over Chinese side Qingdao Jonoon.

His tenure with the Chinese fold ended in 2013 after the club suffered relegation.

In 2015, the 53-year-old returned to Greece where he managed Agrotikos Asteras.