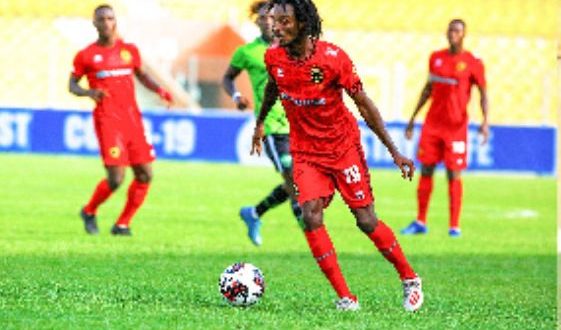 Asante Kotoko have officially reacted to the suspension of their midfielder, Richmond Lamptey.

The club in a statement released on May 16, 2022, confirmed that the news of the player being banned for 30 months has reached them.

The Reds stated that they have been playing throughout the process of his prosecution and will continue to support Lamptey.

The statement released via the club’s website reads: “The attention of the Club has been drawn to a decision of the disciplinary committee of the Ghana Football association banning its player, Richmond Lamptey for a period of thirty (30) months. The alleged misconduct of the player is said to have occurred at the time he played for Inter Allies FC.”

“The Player was charged by the GFA at the beginning of the 2021/2022 football season, at a time the Club had signed on the Player. The Club supported the Player through the prosecution process and would continue to lend its support to the Player at this time until finality is brought to the matter.”

The 25-year-old was found guilty of a match-fixing scheme between Ashanti Gold and his former side Inter Allies in 2021.

According to a statement by the Ghana FA, Lamptey was sanctioned for betting on the said fixture after learning the fixed scoreline before the start of the match.

Parts of the GFA statement read: “Paragraphs 18 and 19 of the witness statement stated that in the course of its internal investigation, the name of Seth Osei a player of Ashantigold was mentioned as the one who approached Richmond Lamptey (Inter Allies player) to find out whether the management of Inter Allies had informed the playing body of an arranged match of convenience with a scoreline of 5 –1.”

“According to Prosecution, Richmond Lamptey stated during the interrogation that Seth Osei of Ashanti gold SC called him at the entrance of their dressing room and asked him that ‘haven’t your elders spoken to you’.”