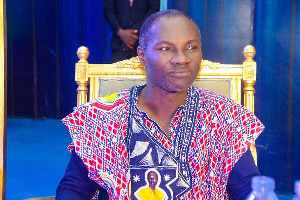 MyNewsGh.com can exclusively report that two luxurious vehicles belonging to the founder and leader of the Glorious Wave Church, Prophet Emmanuel Badu Kobi have been confiscated by security operatives over unpaid duties.

Two of the vehicles, a Lincoln Navigator and a Porsche Panamera with registration number GS 1707-18 have since been moved to Castle Annex by the operatives while there is a hunt to retrieve more of such vehicles belonging to the outspoken Man of God.

“We have so far seized two of the vehicles but he managed to hide the three from us so we are still searching for them. These cars were imported into the country under the previous administration and he failed to pay the duties for all of them. The number on the Porsche Panamera is fake”, a security source confided in MyNewsGh.com.

According to our source, the Man of God will face the consequence of his action if it is revealed the vehicles were indeed imported into the country but the corresponding duties were never paid.

Last week, Member of Parliament (MP) for Assin Central Kennedy Agyapong described him as a car thief who with the help of former President Mahama stole a lot of cars.

He continued that the man of God also has a case at Sakumano Police station for allegedly raping someone at the Titanic beach six (6) years ago.

The loudmouth politician added that he is surprised that 6 years down the line, Ghana Police is yet to bring the preacher to book.

But the Founder and Leader of the Glorious Wave Ministry has rejected allegations that he stole cars and that an Interpol alert has been triggered for his arrest.

Preaching to his congregants’ hours after the allegations went viral on the media space, Prophet Kobi revealed that he began purchasing cars as a teenager and it would be demeaning for him to steal a car.

He then accused some political elements of seeking to tarnish his image for political reasons.

“I know some of you have heard that Badu Kobi has stolen a car, I am too big to steal a car. I started buying cars at the age of 19 so it is never so. It is never true, I am higher than a car. I give out cars and that is not what I think about.

It is the political people who want to do that but let’s leave them. I am better than cars, in the little life I have given out cars and I walked. I have not stolen anybody’s car and I will never do that. I will never speak about this again, what is a car?

Greatness goes with pain but greatness brings the price. They can do everything but they can’t stop me. Interpol director in Ghana doesn’t know anything about this matter. Let’s leave this, the God I serve is a God of judgement. You cannot stop Badu Kobi. By his grace, a car is a common thing to me. I have never gone to Germany to buy a car”, he stated.