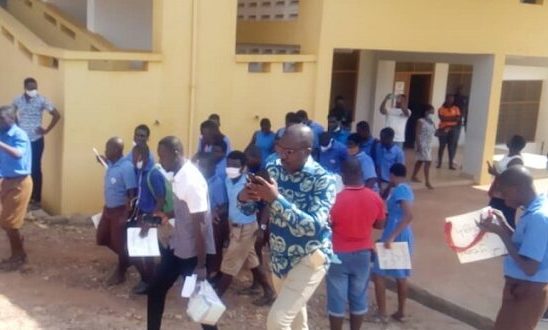 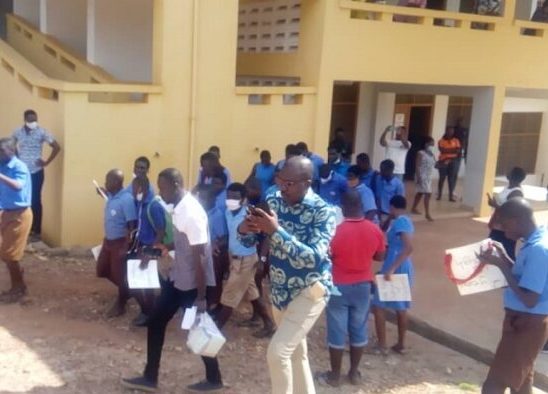 Students of School for the Blind in Akropong in AkuapemUnited North Municipality in Eastern Region on Friday morning embarked on a demonstration for the removal of the Headmistress of the School.

The students accused the headmistress Mahela Narh of mismanagement leading to the gradual collapse of the school and poor academic performance.

They also cited the Headmistress for misappropriation of funds and selling of foods donated to the school by philanthropists. They also alleged that the Headmistress has been verbally abusing students with their disability. 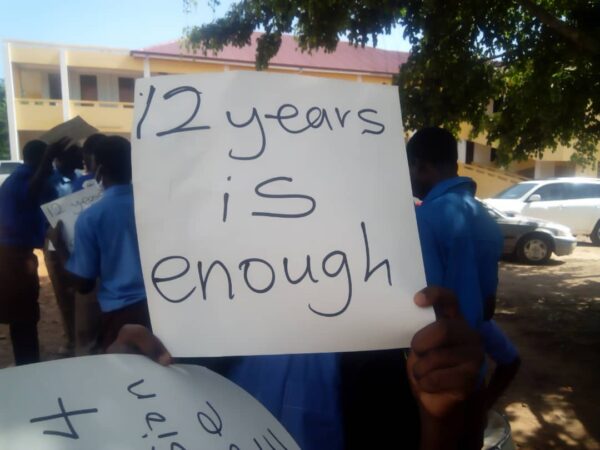 The student also complained about the poor quality of meals serve them.

A Joint Petition by the Students Representative Council(SRC) and Progressive Old Students Association of Akropong School for the Blind presented to the Ghana Education Service, called on all stakeholders, the office of the President, Ministry of Education, the Ghana Education Service and CHRAJ for the headmistress Madam Mahela Narh’s immediate interdiction for proper investigation to be conducted.

“After the investigation, she should be re-assigned because her continuous stay in the school will not bring peace and academic progress”.

Below is the petition

REMOVAL OF THE HEADMISTRESS OF AKROPONG SCHOOL FOR THE BLIND(MAHELA NARH).

The Student Representative Council, the silent majority and the progressive Old Students Association are strongly calling for the removal of the headmistress of Akropong School for the Blind for the following reasons:

GROSS DISRESPECT: The headmistress, Madam Mahela Narh has over the years showed gross disrespect and disregard to the dignity of the blind. Examples are as follows:

She has over the years disregarded and disrespected the prefectorial board which is the main body that channel issues bothering students, and a number of appointments booked with her are to no avail.

The rate at which she raises insults and curses students is alarming. A clear example is the 2015 JHS 3 batch “you will all fail your exams and will be miserable in life”. These harsh words compelled a former teacher who was a Reverend Minister by the name of Reverend Henry Kwadwo Gyekete to intervene for the headmistress to reverse the curse which she never did.

She once told the 2018 assistant boys prefect by the name Opare Asante that “it is because of your behavior that God made you blind”.

She recently cursed a continuing student by the name of Paulina Osei and the likes of other individual students.

So if a special educator can say and sing this way, then what about the ordinary man on the street.

The headmistress secretly lodged a donated money which was meant to renovate the school’s music unit from a philanthropist into a dormant World Vision Project account with a retired staff member the late Mr. Amofah who was a signatory to that account, without the knowledge of the school Bursar. It took the intervention of the Municipal Internal Auditor, Mr. Allotey, before the money was brought to the main school account, which has not been fully used for its purpose. This means that cash donations received from unknown persons and through school activities and outside has never been accounted for. 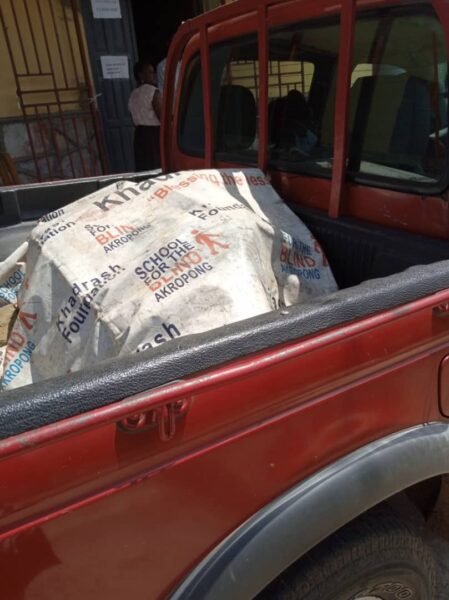 We are aware and know that, there are a lot of donated food items that come from individuals, religious groups, politicians as well as benevolent organization to supplement what the government brings but it will surprise you that the headmistress in connivance with the storekeeper have been taking majority of food items like bags of rice, gallons of cooking oil, toiletries and any other relevant food items that are for human consumption to prominent people in high offices, family and friends without thinking about the students. The quality of our meals are mostly poor since the quality one’s are sent out as gift in an apparent attempt to grease the palms of people in high authority. Anytime we complain of the quality and quantity of our food, we are told the government has not been paying our feeding grants. If this not true, and she is disgracing the president and the first lady who is the Patron of the school, then the government must take immediate action against her. Apart from the school stores where food items are kept there is a separate room where those food items that are sent outside are kept which only the headmistress have access to the room.

POOR ACADEMIC PERFORMANCE UNDER HER WATCH:

Academic work under her regime has gone down drastically. We are pleading with authorities to analyse the BECE results for the past 10 years and compare it with results before she became the headmistress in 2009. Almost 12 years of her stay in the school, academic performance has fallen. Meanwhile, the vocational craft department and music unit which serve as the heart of the school, where talents are being discovered have not been given much attention since they lack practical materials. Teaching and learning materials, assistive devices like talking calculator, perkin brailler machines and two hundred (200) pieces of tablets which was supplied by the government and benevolent organizations have been kept at the school stores which some are being destroyed by mice and termites without its usage.

The school is currently lacking teachers to replaced deceased staffs and other teaching staffs who have been transferred to different institutions which have become a vacuum thereby hindering effective teaching and learning in the school. For example the school is having one French and a Twi teacher who teaches from primary to JHS.

Visually impaired national service teachers who were past students of the school and were posted to the school to give back to their alma mata were denied accommodation by the headmistress, meanwhile, there are a lot of rooms rotten in the school. Through this, the school lost two (2) ICT teachers to Okuapeman SHS. Meanwhile, ICT Is not given much attention we students.

The school is having more than a thousand mattresses which were supplied by the government but as at now most of us are sleeping on old mattresses which have become lean and flatted, with bed bugs infection but the headmistress has decided not to release the new one’s for our usage which our house masters and mistresses informed her about the development but she wouldn’t listen. 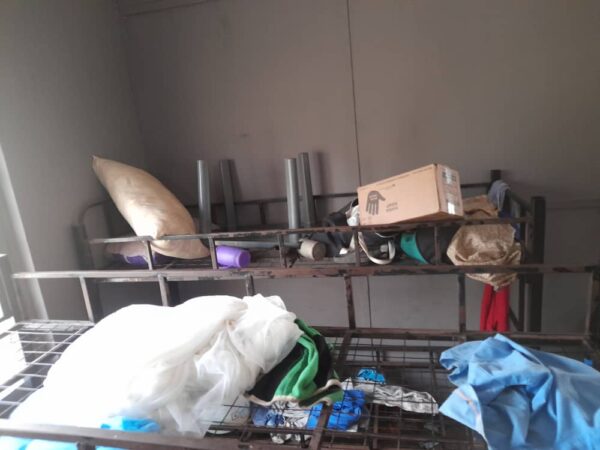 Most of our metal beds are not in good condition which need to be changed. But it will surprise you those new metal beds supplied by the government that were kept for long without its usage have been sold to scraps which shouldn’t be so because it is government property.

Some students are sleeping in cracked buildings which has become a death trap and one day can lead to loss of human lives. Example is the MTN Ghana Foundation Boys Dormitory and the new Girls Dormitory, leakages of the dining hall, an abandoned school bus donated by a philanthropist has been left in the mercy of the weather without its usage. With all these, nothing has been done, meanwhile, we receive cash donations every now and then. 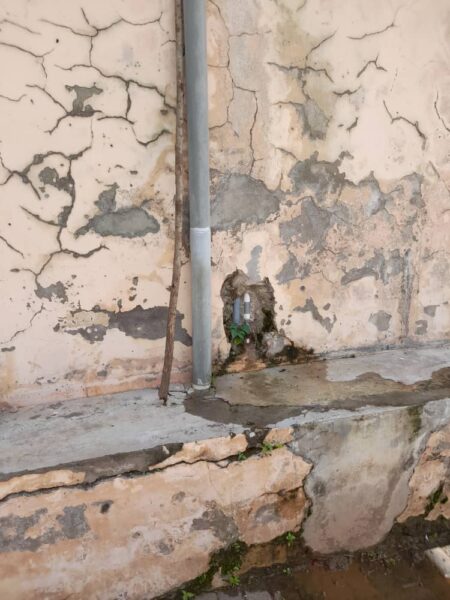 NO AFFECTION AND MOTHERLY LOVE FOR STUDENTS

Students’ welfare has not been considered as her top-most priority, since there are a lot of students who needs admission in the school to study but were denied due to her discriminative nature. Examples are adult students. Secondly, one little girl who fell into a deep pit was left in the hands of her parents to pay for her medical treatment without the school’s concern. Another young girl by name Victoria Asem was allegedly raped by an unknown man when she was bathing at the bathhouse due to a lack of security in the school and nothing was done.

In conclusion, we are calling all stakeholders, the office of the President, Ministry of Education, the Ghana Education Service and CHRAJ for the headmistress Madam Mahela Narh’s immediate interdiction for proper investigation to be conducted. After the investigation, she should be re-assigned because her continuous stay in the school will not bring peace and academic progress. This is the first step as a sign of respect.
Thank you.

Tags blind DEMAND FOR HEADMISTRESS OF REMOVAL school STUDENTS THE