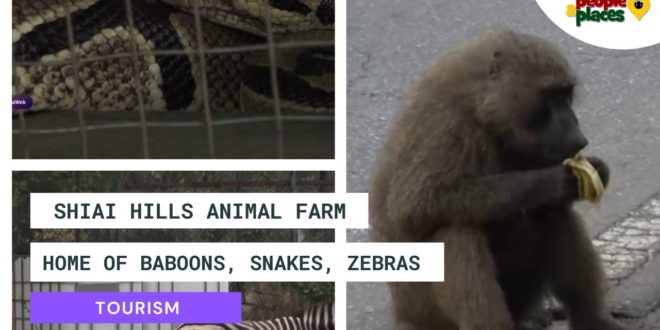 Why you shouldn’t feed the baboons at Shai Hills

It’s instinctive, the urge to feed these intriguing creatures which line up the Dodowa-Doyumu stretch to Akosombo.

These big and small olive baboons, sometimes mothers with babies are unavoidable and their entrancing looks will definitely get to you.

So perhaps you keep it in mind to have a bunch of bananas or something nice to feed them when next you pass by but don’t!

Yes, it’s a caution by personnel at the Shai Hills Resource Reserve who have indicated the dangers associated with feeding these mammals.

Speaking to Wonder Ami Hagan on the People & Places show on GhanaWeb TV, Ishmael Otoo, Assistant Manager of the reserve explained that the baboons are naturally wild and therefore must be considered as such.

He explained that the animals have over time become used to trooping the road side and the nearby communities because they know they will get food instead of staying in the forest and finding food for themselves as they should.

“We don’t encourage people to feed them. We do community education to educate them that they are wild and hence must find food for themselves. In feeding them, they might forget and then they go to the nearby communities and homes and steal foods.

“Sometimes there are issues with animal wildlife conflict – they go there, tend to eat, steal their food and sometimes when they drive them, these baboons will bite them and they can give them infections.

“There are so many cases that we have encountered and so in order to avoid these issues, we are trying to educate them that they shouldn’t feed them,” Ishmael Otoo said.

Aside this, he explained that there are dangers associated with feeding these animals. Ishmael Otoo indicated that passersby can be hurt or bitten if their actions communicate wrongly to the animals.

“They are undomesticated free-ranging set of animals and are wild. When you raise your brows spontaneously is bad communication or just putting your hand on the ground, so when you are closer to them, you are not supposed to do that.

“When the older ones want to attack the younger ones, they do that so in that way they feel like you want to harm them so they can attack you.

“It’s very dangerous because you can’t touch them so in touching them, they can scratch or bite you.

“If you don’t know and you make those facial expressions while you feed them, they can attack you and they are wild so when you get close at some point, there are some points that the younger ones will call out for help from the older ones and they just attack you and when you get bitten, you can get infections like rabies and others because they are wild,” he affirmed.

He also made other interesting revelations about the Shai Hills baboons during the tour.

Previous ‘Breaking the 8’ is a must despite fights – Ablekuma West MCE
Next Water crises hit Kagbahl community, residents appeal for helpCurrent state of the dam in the community