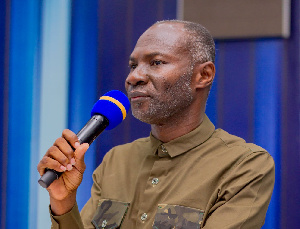 The prophet before the general elections prophesied that former President John Dramani Mahama will win the just ended elections but unfortunately, the prophecy turned out false as President Nana Addo Dankwa Akufo-Addo was declared the winner by the Electoral Commission.

In an interview with Rev Nyansa Boakwa on Happy 98.9FM’s NsemPii, Lucifer said, “this is the downfall of that Pastor, he won’t rise again, this is the last time we’ll be hearing his name”.

He advised the general public to be on the lookout and observe because, from now till next year, “his name will gradually fade out and all his members will start leaving his church, eventually he’ll lock down his church”.