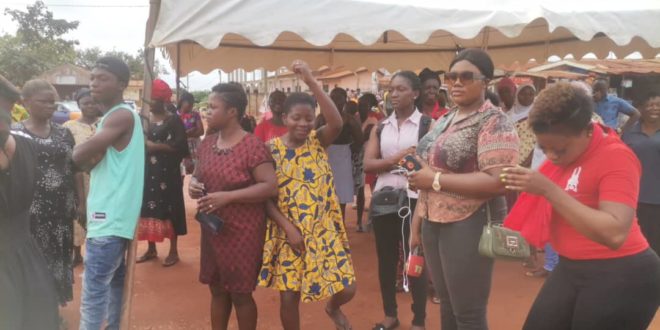 Seven communities in Kwadaso Municipality and Atwima Kwanwoma District of the Ashanti Region are on the heels of Roads Minister over stalled road projects in the areas.

The communities which include Atwima Takyiman, Denkyemuoso, Boko, Twedie, Foase, Trabuom and Nweneso have accused the Minister of Roads and Highways Kwasi Amoako Atta of complete neglect, just as the major road connecting them have been taken over by flood.

Addressing the media at a press conference at  Atwima Boko on Tuesday October 11,2022, assembly members from  the seven communities observed that the road which stretch from Kwadaso to Nweneso was begun in December 2017 but has been stalled for four years now.

The Assembly member for Atwima Takyiman /Denkyemuoso Electoral Area, David Asare who was part to leading members of the presser said the Minister of Roads and Highways Kwasi Amoako Atta has completed ignored the project, causing serious economic problems in the area.

“President Akuffo Addo prior to 2020 elections came to our districts and promised to complete this road, He even instructed Roads Minister to finish the work with alacrity, here we are now in 2022 plying muddy roads”.

“Thousands of residents in these seven communities believe the government has deliberately shun them in its roads infrastructure projects, thats why we are appealing to the president to fulfill promises made to them”. He said.

The Assembly member for Atwima Boko Electoral Area Emmanuel Agyei Owusu noted that, all appeals to the government to complete the road have not been heeded to.

The situation according to him has added prevented investors from coming to the areas for development.

“It is a hell for communities and commuters who access this road day in day out, ecomonic activities are virtually paralyzed, as farmers, traders, construction workers and other businesses find it difficult to convey their goods and products due to the deplorable roads”,  he said.

Previous Woman, 34, dies after being [email protected] by three men and set on fire
Next Opuni’s had 4 eye surgeries; excuse him for 6 weeks – Lawyers beg Honyenuga