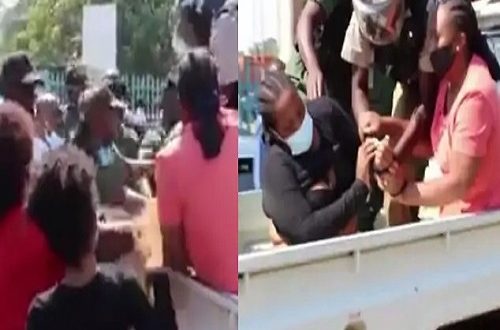 Police in Lusaka, Zambia have now arrested the wife and daughter of the National Democratic Congress leader (NDC) Chishimba Kambwili.

Kambwili was earlier incarcerated for counts of forgery and uttering a false document but according to reports, one of the charges was dropped.

On the morning of Tuesday, 20 October, while attending a court hearing at the Lusaka Magistrates’ Court, Kambwili’s wife Carol and daughter Chanda were arrested on allegations of misconduct.

According to Zambian Observer, the two became unruly after they were informed that Chanda could not access the court grounds as she had no clearance

Carol is then alleged to have slapped a police officer leading to their arrest and as they were being bundled into a police van, a crazy incident occurred.

As the public came to the vehicle and appeared to be against the heinous act, there was a young lady whose eyes were set on Chanda’s expensive wig.

From a video shared by Nkani on Facebook, one could see the young lady, with a mask on, stretching to steal Chanda’s wig as others were busy trying to confront the police.