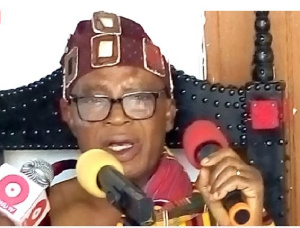 Police pick up Osudoku sub-chief with links to secessionists

A sub-Chief of the Osudoku Traditional Area in the Shai-Osudoku District in the Greater Accra Region, Nene Tawiah Agblom II is reported to have been picked by the Bureau of National Investigations (BNI) over the weekend for his alleged involvement in the activities of the secessionist group in some parts of the Volta Region.

Akuse Divisional Police Commander, Chief Superintendent Winfred Asare Nyarko, who confirmed the arrest to Daily Graphic did not give further details of the development.

After the arrest of the Head of the Dorsi Clan/Division, the traditional council in a statement said Nene Tawiah Agblom II Nene Tawiah Agblom II’s actions come to them as a surprise, adding that his activities were solely his and not representative of council. They therefore sought to disassociate themselves from the activities of the secessionist group.

A statement issued by Paramount Chief of the Osudoku Traditional Area, Aadegbor Ngmongmowuyaa Nene Kwesi Animle VI, said, “This press statement has become necessary and appropriate because information reaching me, which has been confirmed when I sent an emissary to follow up to Accra, indicates that one of our chiefs, Nene Tawiah Agblom II, the Head of the Dorsi Clan/Division, has been picked up by the authorities for involving himself in the activities of the Western Togoland secession.

“Considering his position and relationship with me as the Paramount Chief and the entire people of the Osudoku State, it became expedient to come out to disassociate myself and the traditional council and area completely from this diabolic agenda.

“I also unequivocally condemn the move without any reservation whatsoever,” the statement emphasized.”

“We are highly surprised at our chief’s involvement in this heinous crime,” it added.

Meanwhile, a total of 60 persons have so far been arrested in connection with recent disturbances in parts of the Volta Region.

The disturbances were caused by suspected members of Western Togoland secessionist group.

Fifty-four of these suspects have been remanded in custody as the government intensifies security operations in the Region to bring the insurgency under control.