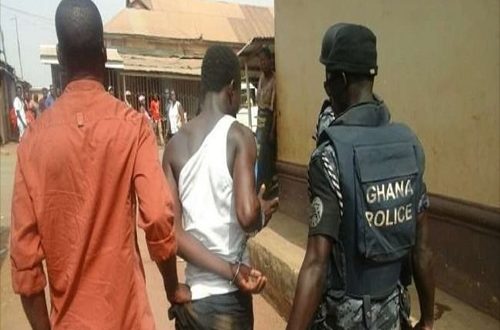 A police officer with the Accra Regional Criminal Investigations Department, Lance Corporal Bright Akosa, and two others have been arrested by the Anti Robbery Unit of the police in connection with a robbery and murder.

According to Citinewsroom, to the Director-General of the CID, COP Ken Yeboah, the police officer used his service weapon to allegedly kill a taxi driver, 46-year-old Samuel Tawiah, during the robbery.

The three have been prosecuted, charged and remanded into police custody after arrests were made on September 14.

“The policeman and his accomplice were offering a Nissan Versa taxi for sale in Cape Coast when they were arrested,” COP Ken Yeboah said to the press on Friday morning.

The police officer had gone to Pokuase to hire the taxi to Adjei Kotoku “under the guise of going to visit his building site.”

Unknown to the taxi driver, one of the suspects, Ebenezer Tetteh, was hiding in a nearby bush.

“When the Lance Corporal got to the spot, he directed the taxi driver to stop the vehicle, and then he shot him twice as the driver was sitting behind the steering wheel.”

“Ebenezer then emerged from his hideout, pulled the deceased taxi driver and the policeman shot him again to ensure he had died. They left him in the bush,” the CID boss continued.

The suspects then moved to the Central Region to sell the taxi for GHS8,000 to the third suspect.