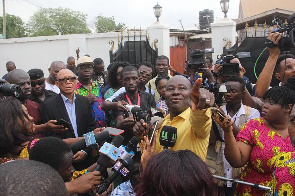 The Ballistic Unit of the Ghana Police Service has identified 19 bullet holes at various spots near the residence of Mr Delali Kwesi Brempong, the parliamentary candidate of the National Democratic Congress (NDC) in the Ayawaso West Wuogon by-election which was rocked by violence.

The bullet holes were found on trees, a wall, two containers, including a hairdressing salon, a cargo truck and a pick-up.

A ballistic expert of the Criminal Investigation Department (CID), Mr Michael Cudjoe, and other investigators walked members of the Emile Short Commission through the area on Friday.

The members of the commission, led by its chairman, Mr Emile Short, inspected the scene of the violence.

The visit was meant to provide the commission with evidence or otherwise related to the testimonies given by witnesses who had appeared before it so far.

It took them to the La-Bawaleshie Presbyterian Basic School, sites of bullet holes, near Mr Brempong’s House, inside the house, as well as a hairdressing salon located 100 metres away from the house of the NDC candidate.

Conducting the members of the commission round the area, Mr Cudjoe said the marks of the bullets indicated that they were fired from high velocity weapons, including AK47s and pistols.

He said from the bullet holes, it appeared that some of the gunshots were potentially aimed as warning shots hence they were fired upwards.

Mr Cudjoe said the holes on the walls were not bullet holes but rather from nails meant to put a signage on the wall.

The commissioners also met Mr Brempong who showed them the layout of his house, which, he said, included offices on the down floor and a church pastored by his wife on the first floor.

He said the main house had his office, a garage, where he kept chemicals, including caustic soda, for his industrial work, a room for equipment for internet service.

On the allegation that there was a container with weapons in the house, Mr Brempong said the police did not ask him anything.

He said he was not questioned about any weapons by the police, adding that “they said they were not there for that.”

He also offered to open his garage to the commissioners to see the content but they declined saying, “it was not necessary.”

Briefing the media, the Executive Secretary to the commission, Mr Ernest Kofi Abotsi, said the visit allowed the commission to “see things for themselves. Pictures can relay a thousand words that words cannot relay.”

“The commission has had a first-hand opportunity to inspect bullet holes, angles of penetration, to speak to people on the ground, to inspect potential dangers that could have happened but for the intervention of God.

He expressed the hope that the Commission would be able to meet the deadline for accomplishing its task.