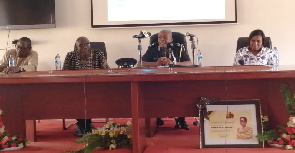 The Ghana Police Service is finalizing a policy document that seeks to protect journalists whilst covering police operations.

This comes on the back of alleged police brutalities on media personnel in the line of discharging their duties.

The police have in recent times come under fierce criticism for alleged brutalities on some journalists across the country.

In response to this, the police administration has taken steps to protect journalists whilst covering police operations.

A policy document has been drafted to recognize the safety of journalists in the discharge of their duties.

Addressing media personnel in Kumasi, Director-General in charge of Public Affairs at the Ghana Police Service, ACP David Eklu, said an attack on a journalist is an attack on the people’s representatives.

“The police administration frowns on attack on journalists. Even though you are not parliamentarians, you represent the various shades of opinions in the country.

“Just like any other Ghanaian needs protection, the media need a special protection because of the work they do,” he hinted.

ACP Eklu said the police will collaborate with the media industry leaders to come out with a framework that would lead to the safety of journalists as far as police operations are concerned.

Journalists have been advised to always disclose their identities to the police when they arrive at a violent scene to avoid misunderstanding and attack.

Ashanti Regional Chair of the Ghana Journalists Association Kingsley Hope pleaded with the police to ensure journalists are given maximum security in the discharge of the duty.

He also advised journalists to be security conscious when covering violent assignments.