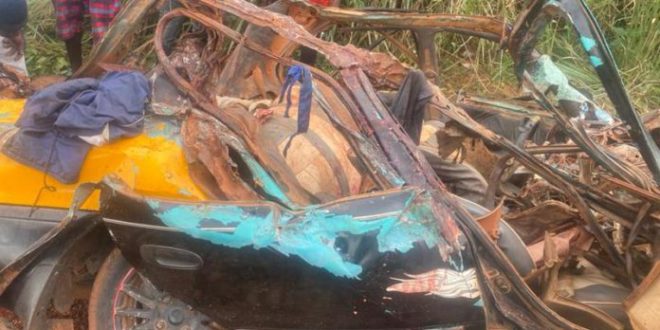 Seven persons have been confirmed dead in an accident on the Kukuom-Kwapong road in the Asunafo South District of the Ahafo Region.

Personnel from the Goaso Fire Service who were on their way to rescue the victims have also reportedly been involved in another crash.

DSP Gaisie explained that a taxi with registration number GT 7008 – X with seven persons on board, heading from Kwapong to Kukuom collided with a Man Diesel tipper truck.

The collision, he said, was at a place called Obaayaa, killing all the seven persons in the taxi on the spot.

DSP Ekow added that upon hearing about the accident, the Asunafo North Municipal Fire Service deployed seven men to the scene but they were also involved in an accident while on their way.

The driver of the fire tender, he narrated, lost control and crashed into a Kia Truck parked on the road and landed on its side

However, none of the Servicemen died except for injuries sustained.

According to him, the conductor of the tipper truck also got injured and was rushed to the Goaso Municipal Government Hospital.

He said the dead bodies have also been deposited at the mortuary of the same hospital.